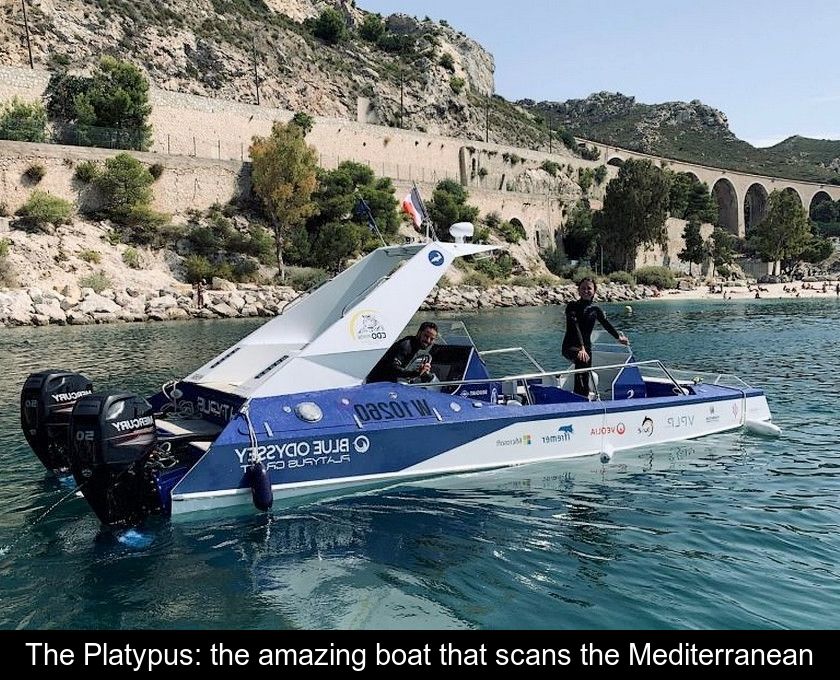 The Platypus: The Amazing Boat That Scans The Mediterranean

A semi-submersible boat designed by a French company, the Platypus can carry out different missions on and under water. We invite you to discover this unique boat, which plays the role of sea cleaner in the Mediterranean in partnership with the association Blue Odyssey.

An invention made in France

The Platypus was created by a French inventor, François-Alexandre Bertrand. This amazing boat, whose name means platypus in English, looks like a small trimaran of 7 m long and 2.5 m wide.

Seen from afar, it looks like an ordinary boat. But it has the particularity of having a submersible part. Its central part can dive to a depth of 2 meters thanks to a hydraulic and ballast system, while its side structures continue to float at water level.

This funny boat with futuristic looks can thus be described as a semi-submersible, halfway between catamaran and submarine. Inside the boat, the divers do not need tanks because oxygen is distributed to them from the surface, thanks to air compressors integrated into the boat.

This French invention developed over the past ten years in Nantes is intended to be marketed to tourism professionals or environmental specialists for coastal bottom observation.

Thanks to its singularity, the Platypus is just the thing to carry out different missions at sea and draw up an inventory of the sea floor. It allows to really see what happens below the surface of the water, at a shallow depth.

This semi-submersible can notably collect information on fauna, flora but also on macro-waste and water pollution not far from the coast and this, in a much faster way than during a traditional dive with tanks.

This is why it was chosen by the Blue Odyssey association to lead a reconnaissance and cleaning expedition in the Mediterranean Sea. This boat criss-crossed the Mediterranean coastline from Marseille to Monaco.

From June 8 to 28, 2022, the Platypus sailed and cleaned the Mediterranean Sea as part of a project managed by the Blue Odyssey association: the 7th continent expedition. The name was of course chosen in reference to the continent of plastic waste drifting in the world's oceans.

The Blue Odyssey association is fighting against this plastic pollution in all the seas and oceans of the world. Scientists estimate that by 2050 the ocean will contain more waste than fish. This is why this association has set itself the goal of finding solutions against underwater pollution and cleaning up the seas.

Equipped with several sensors and mapping technologies, the Platypus has made it possible to draw up an inventory of the Mediterranean coastline, the most polluted in Europe. It located waste that divers collected and then sorted and recycled on their return to port...

In addition to acting as a garbage collector, the Platypus has made it possible to collect data that will be made available to town halls, departments and regions. The objective is to allow these local authorities to know the state of the coastline and to take adequate protection measures.

Through this mission, the Blue Odyssey association also wishes to raise public awareness about the protection of the marine environment. The cleanliness of the oceans is everyone's business and this innovative French boat is the proof that solutions exist.

If you want to know more about the 7th continent expedition, we invite you to visit the official website below.

Next → The Salon de l'agriculture: the largest farm in France in Paris