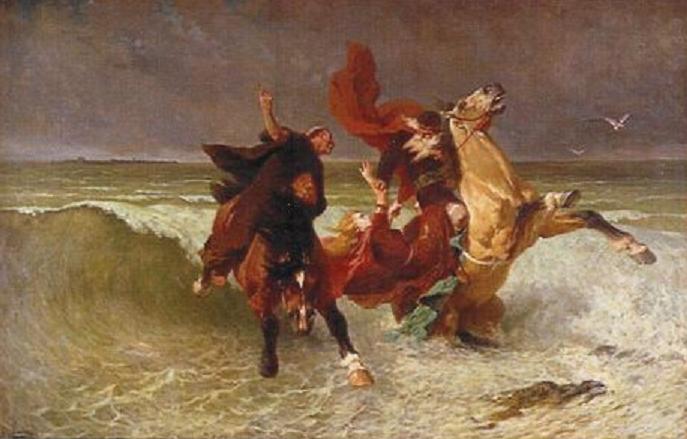 gralon.net is today a quality tourist, cultural and professional directory aimed at a French-speaking public of more than 1.5 million unique monthly visits. Every day, more than 20,000 websites benefit from Gralon's notoriety to acquire additional customers. Don't hesitate to register, it's FREE!

It is now certain that the ruins of Douarnenez, Crozon, Cap de la Chèvre and Vannes were made at the time of the great flood. These cataclysms were transmitted to us on the beach of Douarnenez by the legend of Gralon; in Cadiz, by that of the voyage of the Celtic Hercules of Og-mi.

A Celtic legend tells us that at the tip of the island of the Goat there was a town called Is, governed by King Gralon, who had an only daughter called Dahu whom he adored. Now, pomp, luxury and debauchery reigned supreme in the opulent city of Gralon, and his daughter was not the least depraved among the beautiful women of Is.

Gralon groaned at the excesses of his dear daughter and his people and prayed to God to open their eyes; but it was in vain. One day, therefore, the sun eclipsed and a comet with a huge tail appeared on the horizon; it was the omen of an imminent catastrophe. On the night of that day, Dahu was presiding over a superb banquet which she was offering to a thousand guests. The princess gave the signal for the feast by emptying a large cup or Hanap of Cervoise (a kind of beer) in one gulp; then, seizing a hunting knife, she began to cut up an enormous elk, then a wild boar and two wild boar; the aroma of these victuals delighted the guests' sense of smell, flattered their palates and aroused their enormous and vast appetites to the highest point.

But no sooner had the feast begun than the voices of the guests made the palace of Gralon resound; at the same time all these debauched people heard sinister voices in the first planes of the Astral; the earth shook, the guests left the feast hall in panic, rushed into the paths, the streets and the roads in which reigned such a deep darkness, a night so black, that one could not see in the sky the shining of "the path of the winter". The lightning alone tore the sky, the thunder rumbled, the storm gathered and soon burst, pouring such torrents of water on the town of Is that it soon disappeared with all its inhabitants.

Gralon, in spite of his old age, hastily gathered up all that he had most precious, and with this treasure he placed his daughter on a fiery steed which he himself mounted to direct its course, but the flood, even more agile than the fiery animal, snatched his burden from him and swallowed him up in an immense whirlpool. It seemed that divine justice was satisfied, for calm suddenly returned, but the unhappy city of Is, that immense receptacle of debauchery and infamy, remained forever sunk beneath the waters, along with a vast continent.
Today it is the Atlantic Sea. The Bretons of the Bay of Douarnenez claim to see, even today, souls or rather etheric doubles wandering around in the form of crows; the unfortunate ones seem to flit from rock to rock on the very spot where Gralon and his daughter once perished.

In the 19th century, several authors put their talent at the service of this mythical tale. Théodore de la Villemarqué evokes this theme in his Barzaz-Breiz. In 1850, Olivier Souvestre, from Morlaix (not to be confused with Emile Souvestre, the author of Les Derniers Bretons), created a long gwerz of more than 200 verses: "Gwerz ar roue Gralon ha Kear Is".

It is very popular throughout Brittany.
Who does not know its first verse: Petra'zo nevez e kêr Is.
There is no more popular figure in the history of Cornwall than that of King Gradlon.
Even today, despite the ravages of the revolution, the equestrian statue of Gradlon is still enthroned in the air between the two spires of Quimper cathedral.

Yann-Fañch Kemener interpreted this gwerz which is about the eternal fight between Good and Evil, God and the Devil... first verses :

The lament of the city of Ys

What is new in the city of Ys,
Since the youth is so mad.
Since I hear the biniou so,
Bombards and harps.

Groves of bramble have grown,
In the doors of closed churches,
And on the crying poor,
The dogs are made to bite them.

Ahes the daughter of King Gradlon,
The fire of hell in her heart,
At the head of debauchery,
Leads the city to its ruin.

Saint Gwenolé, with sorrow of heart,
Came to his father many times,
And with pity, the man of God,
Said to the King:

"Gradlon, Gradlon, pay attention,
To the disorders that Ahes leads,
For the time will be past
When God will throw his wrath."

And the wise King, incensed,
His daughter advised,
But weakened by old age,
Has no strength to fight her.

Tired of her father's reproaches,
And to leave his gaze,
Built with the help of evil spirits,
A beautiful palace by the locks.