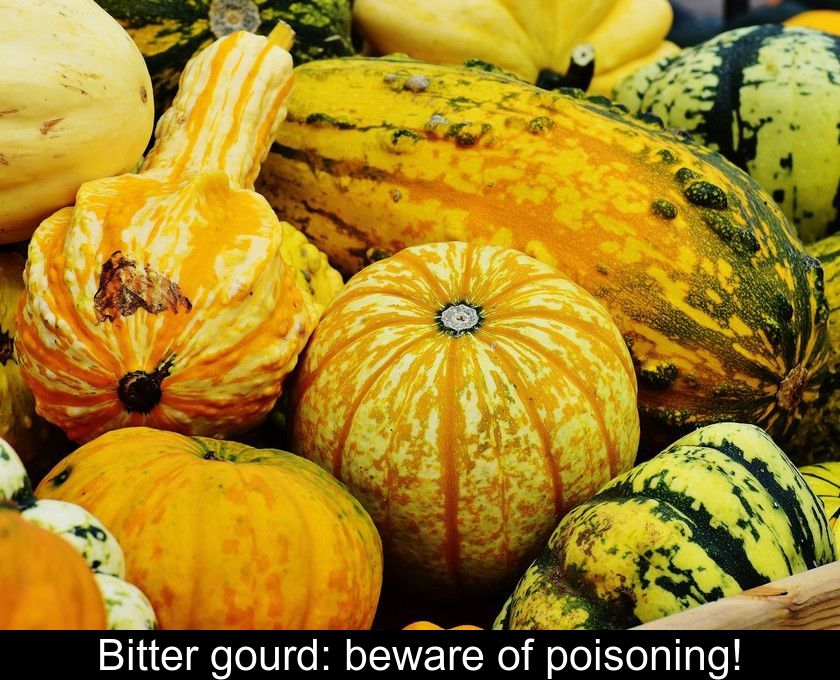 With Halloween approaching, pumpkins and cucurbits of all kinds are flourishing on the shelves. But beware: contrary to what we often imagine, not all squash are edible! Some cucurbits with a bitter taste can cause food poisoning, sometimes serious. We explain how to recognize the varieties of toxic squash also called bitter gourds.

What are the symptoms of squash poisoning?

When buying or growing cucurbits, be wary of poisoning because some squashes contain very irritating and bitter substances called cucurbitacins.

These toxins are naturally secreted by wild squash to repel insects and predators like caterpillars. But they are dangerous to humans, especially since they are not eliminated by cooking the vegetable.

If ingested, these toxic substances cause digestive pain, nausea, vomiting and sometimes bloody diarrhea. They can lead to severe dehydration requiring hospitalization.


What are the toxic cucurbits?

The bitter gourds that should definitely not be eaten are first of all coloquits or ornamental gourds.

We see a lot of Coloquintes on the markets in the fall but you should know that they are not edible and are sold for strictly decorative use.

Even though they are sometimes sold in the fruit and vegetable section of supermarkets, check the labels and definitely don't confuse them with squash intended for food!


What are the risks of growing squash?

There is also a risk of bitter gourd poisoning when growing cucurbits in the home garden.

In fact, some squash that you have planted yourself may become unfit for consumption as a result of hybridization with wild squash.

This hybridization phenomenon can occur when bitter and edible varieties co-exist in the same or neighboring vegetable gardens and are cross-pollinated.

The risk of your squash becoming poisonous increases if you collect the seeds and sow them year after year.

Also note that it's even easier to get poisoned because inedible squash from hybridization look exactly like edible squash! These ordinary zucchini or butternut squash shaped fruits are decoys produced by the plant to fool insects.

The only difference is their bitter taste should alert you. Toxins called cucurbitacins are what cause this bitterness.

According to France's poison control centers, of the 353 cases of poisoning reported between 2012 and 2016, 54% were due to bitter gourd harvested from the family garden.


How to limit the risks of intoxication?

To avoid food poisoning from bitter gourds, keep in mind that Coloquintes or ornamental gourds are all poisonous and should never be eaten. If in doubt at the time of purchase, ask a salesperson.

When cooking squash, whether you bought it commercially or grew it in your own garden, it is advisable to taste a small piece of raw vegetable. If the taste is bitter, spit it out and throw the squash away! You should not eat it, even cooked.

Finally, be careful when growing cucurbits in your home garden. Never eat wild squash that has grown spontaneously.

Also, avoid collecting seeds from your previous crops to reseed. To limit the risk of poisoning, it is safest to buy new squash seeds each year.


What to do in case of intoxication?

Do not throw away the offending squash so that experts can analyze it.

← Previous Bed linen: how to wash a pillow?

Next → Bringing in plants for winter: when and how?