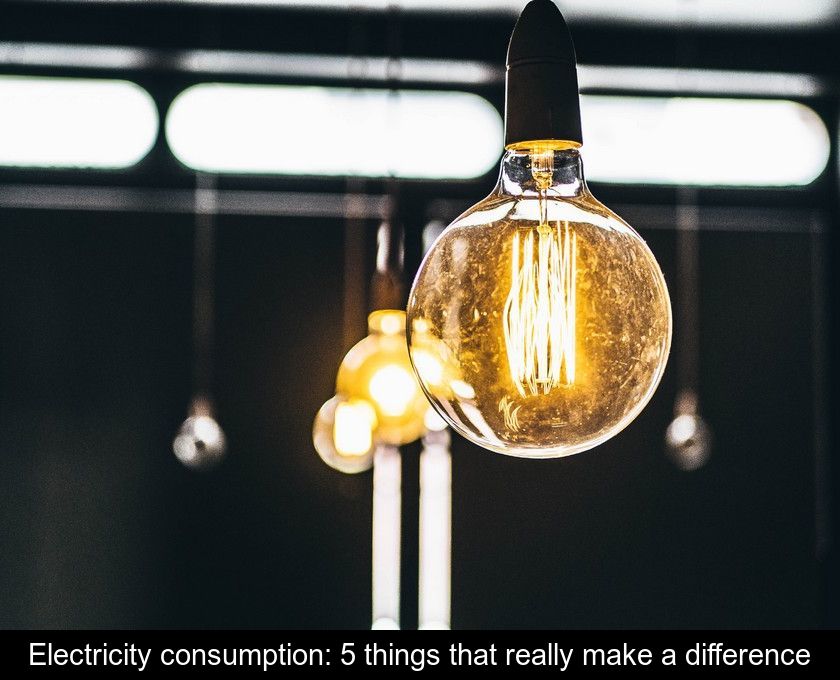 With inflation and rising energy prices, it is more necessary than ever to review our consumption downwards. Among the many eco-actions that can reduce electricity consumption, we have selected 5 actions that really make a difference.

1- Turn down the heat by one degree

Home heating is, along with hot water, the largest energy expense item. It alone accounts for 66% of the energy bill of French households, according to the Agency for the Environment and Energy Management (ADEME).

If you want your efforts to really make a difference on your energy bill, then it's on heating that you need to act first. The first of the 5 most effective gestures to reduce your electricity consumption is to lower the temperature in your home by 1°C.

Set the thermostat to 19°C in the living rooms and settle for 17°C in the bedroom. Not only will you lower your bill by an average of 7% over a year, but you'll sleep better...

To help you properly regulate the heating in the different rooms of your home, you can also purchase programmable room thermostats. According to Ademe, this can save up to 15%.

As we told you above, the water heater is the second largest energy consumption item in homes. Limiting your hot water consumption is therefore among the 5 actions that really make a difference on your final bill.

This does not mean that you will have to shower with cold water, but simply that you should no longer let the water run :
- when you lather up in the shower
- when you brush your teeth
- when you wash your dishes by hand.

Equipping yourself with thermostatic faucets that decrease the water flow when a certain temperature is reached also saves about 5-10%.

Did you know that putting simple flow reducers on your faucets and shower head can save you an average of €37 per year?

Still on the subject of the hot water tank, it is advisable to :
- turn it off when you go away for the weekend or on vacation
- set it at a temperature between 55 and 60°C.


3- Turn off everything you don't need

If you are already careful with your electricity consumption, you have probably got into the habit of turning off the lights behind you when you leave a room (because 'it's not Versailles here', as a famous advert says ;-))

The Agency for the Environment and Energy Management has also calculated that turning off your Internet box every night can save up to €30 per year. It is one of the devices that consume the most (about 100 kilowatts per year), as well as game consoles and television decoders.

The most effective strategy for reducing electricity consumption is not necessarily to do without certain equipment such as a kettle or hair dryer. Even though these appliances consume a lot of kilowatts, they are used for a short time. This is why their use does not have a big impact on the final bill.

Instead, one of the 5 things that really make a difference is to avoid using the electric oven because this appliance heats slowly and for a long time.

Adjust your menus to use the oven less and cook on the stove tops instead. Did you know that you can make a delicious apple cake in the pan? We invite you to discover our recipe on the right!

For other appliances such as the dishwasher and washing machine, it is important to wait until the machine is full of dishes or laundry before starting a program.

Preferably use the 'eco program' which washes longer but not as hot and saves 45% energy compared to an intensive program. If your subscription allows it, also consider running these machines during off-peak hours.

We don't always think about it, but the last of the 5 things that really make a difference on the bill is to avoid buying and using too many electrical appliances.

Even if you've gotten into the habit of making your own yogurt or using a food processor to make soup or cakes, be aware that these various pieces of equipment add to your energy bill.

To reduce your electricity consumption, don't be tempted by new electrical equipment or trendy food processors. Also, look for appliances that you can do without in the kitchen and in other rooms of the house.

Ademe has calculated that if you own a 7 kg tumble dryer and do without it, you can save an average of €52 per year.