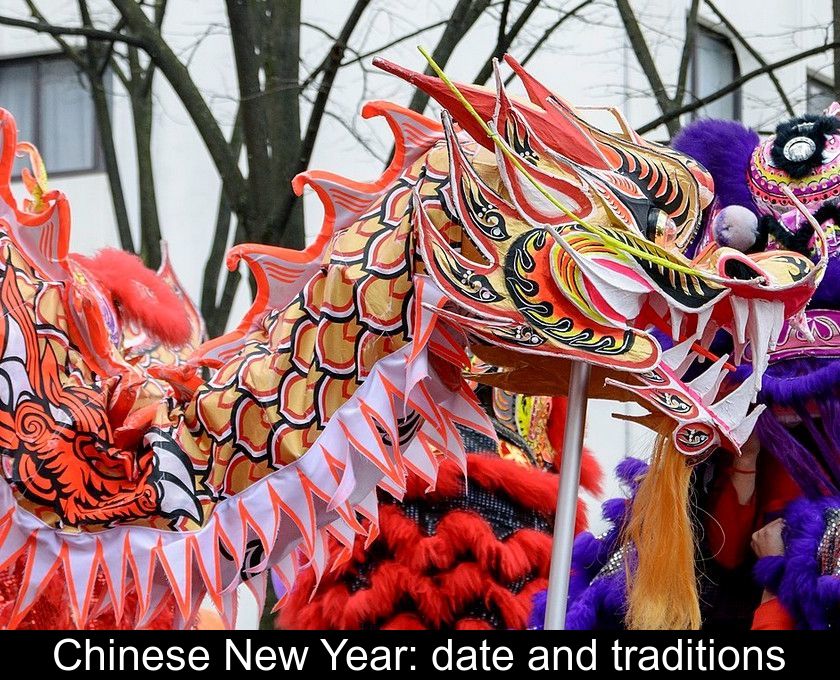 The Chinese New Year is the most important holiday of the Chinese calendar. Each new year is associated with a sign of the zodiac and an element. Here are the traditions related to the passage of the new year.

What is the Chinese New Year?

The Chinese New Year or "passage of the year" is the first day of the first month of the Chinese calendar. It is the beginning of the Spring Festival, a 15-day period that ends with the Lantern Festival.

Because the Chinese calendar is a luni-solar calendar, the date of this festival in the Gregorian calendar varies from year to year, but always falls between January 21 and February 20.

Like all Chinese lunar month beginnings, it is the first day of a new moon. By convention, the astronomical alignment that signals the new moon is determined at the Purple Mountain Observatory in Beijing.

This year, the Chinese New Year falls on February 1, 2022 and the new year will be the year of the Water Tiger.

In which countries is Chinese New Year celebrated?

Chinese New Year is officially celebrated in China (7 days off) and Taiwan (5 days off), Hong Kong and Macau (3 days off), as well as in some Asian countries where the influence of Chinese culture is important: Singapore and Malaysia, Brunei and Indonesia, Vietnam (Tet holiday).

The New Year vacations are a period of migration accompanied by traffic jams on the roads and congestion in stations and airports, many people trying to reach their families, sometimes from abroad.

The holiday is also observed individually around the world by members of the Chinese diaspora, and sometimes also by Japanese, Miao, Mongolian, Tibetan, Nepalese and Butanese.

How do you celebrate Chinese New Year?

The celebrations, customs and taboos of the Spring Festival vary in detail depending on the region or time period. It is about starting the year on the right foot by having rid oneself of the bad influences of the past year and surrounding oneself with auspicious signs. Objects or foods with homophony with lucky words are used.

Many superstitions are associated with this period. One should not use bad words and talk about death. On the first day and the following days, one should sweep from the threshold inwards so as not to drive luck and wealth out of the house.

The main celebrations of the Chinese New Year include a New Year's Eve where dishes with lucky names are served, followed by a night of vigilance, which some people spend playing mahjong, as well as the distribution of gifts in red envelopes and the lighting of firecrackers to chase away bad influences.

The great cleaning of the house is done. On the last day, wishes written on red paper, symbolizing good luck, are posted everywhere. These are characters like fú (?) happiness, or ch?n (?) spring, often pasted upside down because the word "reverse" is homophone of "arrive". The reversed fu character therefore means: "Happiness has arrived".

Traditionally, during the Chinese New Year, a strip of red paper with a verse written on it is glued on each side of the doorposts. Of course, last year's decorations and inscriptions were first removed.

This holiday used to be an opportunity to renew one's wardrobe, but with the development of the ready-to-wear industry, this custom has lost some of its value.

On New Year's Eve, dinner can only begin when the whole family is present (empty seats are reserved for members who cannot attend). It is usually large and often includes symbolic dishes to ensure health, academic success, etc.

Fish, whose name is a homophone of surplus, must be present at every New Year's meal to ensure that one will never lack for anything. Some people even take care not to finish their portion, in order to make its symbolic meaning more complete.

In northern China, a dish of ravioli is usually served because its shape is reminiscent of yuanbao, ancient ingots. The traditional dessert is niangao, "New Year's cake"; gao, cake, is a homophone of growing, and eating it is a guarantee of growth in all desired areas.

The next morning, many people go to the local temple and then to the ancestral tombs if they live nearby. It is considered that the earlier the visit to the temple, the better the luck in the year. Therefore, sometimes the faithful would crowd in front of the big temples before the doors opened in order to be among the first. Families who could afford it would order a lion or dragon dance (which represents nobility, bravery and luck).

In some cities outside China, such as Paris, the Chinese diaspora organizes a parade: this tradition began in San Francisco in the second half of the 19th century.

← Previous Chicken with mustard: the recipe in pictures

Next → Chocolate cake with olive oil: a vegan recipe