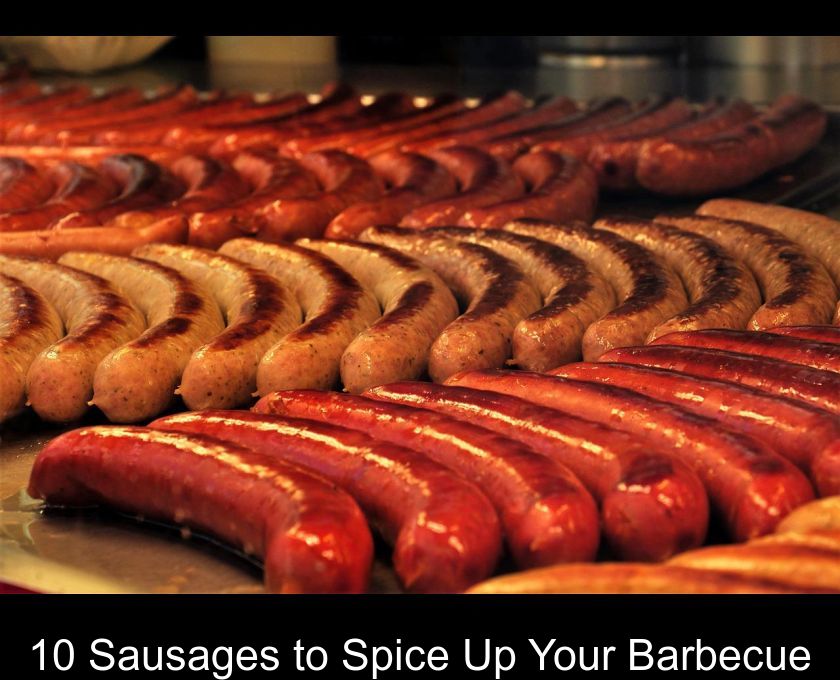 10 Sausages To Spice Up Your Barbecue

Summer has arrived without warning and like every year you get out your barbecues to enjoy convivial evenings and weekends with friends or family. Chipolatas, merguez and Toulouse sausage are among the stars of the grill. But did you know that with the development of delicatessens, ethnic grocery stores and the Internet, you can easily find sausages from other countries that will enhance your barbecues in an original way? Then let yourself be tempted by our ten sausages to impress your guests.

Often disparaged or looked down upon, English gastronomy still has a hard time making a place for itself in the world. Yet if there is one product that the English master to perfection it is the sausage. Present in the famous "English Breakfast" and known worldwide, the sausage is one of the most important elements. If every region, sometimes every city, of England has its recipe, the Lincolnshire sausage is one of the most successful.
The sausage is made from a combination of coarsely chopped pork, sage, rusk. The mixture is stuffed into natural pork or sheep casings. Sage adds a fresh taste to the meat and flavors your grill. Some modern recipes add Thyme or parsley to the mixture.

Crayfish Sausage, all the flavors of Louisiana

Crawfish boudin is a specialty of Cajun cooking, a sausage made with ground crawfish meat and finely chopped sautéed vegetables such as onions, celery, spring onion, peppers, garlic and parsley. White rice cooked before being stuffed into natural casings is then added to the mixture. You can also shape balls of your mixture that you will then roll in breadcrumbs before frying them.
Sausage can be steamed, smoked or fried, eaten on slices of toasted bread or seasoned with hot sauce or mustard, but it develops all its flavors grilled on the barbecue.

The Sai Oua, the exoticism of Laos

Sai Oua is a sausage of Lao cuisine, made from spicy pork that is easily found in markets, street stalls, restaurants and every family has its own recipe. Native to Laos and northern Thailand, the sausage is usually served with glutinous rice, after being barbecued.
The sausage is cooked from ground pork shoulder, mixed with some of the herbs and spices commonly used in Lao cooking: shallots, lemongrass, chilies, combawa leaves and garlic. Some cooks also add padaek sauce, which is a popular fish sauce in Laos.

"Barbecue Snags" are thick Australian sausages, usually made with beef, pork, garlic and onions. They are the staple food of every Australian barbecue party, where the sausages are accompanied by mashed potatoes, grilled onions, gravy, salads, chutneys and artisan breads.
Over time Barbecue Snags have gone through countless recipes and Australian chefs at top restaurants serve them at their tables and offer original versions: lamb and rosemary, chicken and cheese or beef and red wine. If you make your own sausages don't hesitate to innovate in your stuffing mix. These Australian sausages are more in the spirit of the recipe than the exact recipe.

Cooked on wood fire directly in the chimneys of Romanian houses the Caltabo? is a very appreciated dish. For a few years now, many restaurateurs have been offering it in the summer barbecued with a salad. It is a pork sausage with a liver base. Since it is primarily a house specialty, there is no one recipe. In addition to liver, you can add other types of offal, such as spleen, heart, lungs or kidneys.
All ingredients are boiled with garlic and bay leaves before being chopped and combined with pork, caramelized onions, spices and sometimes rice. They are traditionally served cold but cooked with bread and pickles.

Makanek, Oriental Cuisine on your Grill

Makanek are small Lebanese sausages made from lamb, veal or both mixed together. The sausages are seasoned and spiced with cumin, cinnamon, nutmeg, pine nuts, vinegar and white wine, all of which is then filled into sheep casings.
These Lebanese sausages release their full flavor when grilled, and remember to drizzle them with lemon juice before serving. Often provided with pita bread in Lebanon, they cook very quickly, so they're perfect for an impromptu barbecue or if you're short on time to cook.

Snacking, on the go, on the way home from work is common in many African cities. In Kenya, the favorite snack is the mutura sausage.
Mutura is a sausage made by stuffing goat intestines with a mixture of ground meat, goat blood, and spices and condiments such as ginger, garlic, coriander, and piri-piri peppers. The sausage is boiled and then placed on a grill to give it a unique smoked flavor. It is recommended to accompany the sausage with a few glasses of cold beer.
Traditionally, only men prepared mutura on special occasions, such as dowry negotiation ceremonies. The whole process of making the sausage is a ceremony in itself, which is peppered with lots of laughter, jokes, and drinking.

Goetta is a casingless meat stuffing shaped into a sausage. It is a Cincinnati specialty, although its roots are in Germany, due to the influx of Germanic immigrants in the 19th century. The sausage is the star of breakfast and consists of pork, beef, onions, spices and oats.
Traditionally sliced and grilled until golden brown, then served with eggs and ketchup on the side. What was once a popular breakfast has become a trendy and glamorous dish, it can even serve as a topping for a burger. As further proof of its popularity there is an annual festival held since 2004 in the Cincinnati area, called Goettafest, with music, dancing and of course giant barbecues to enjoy goetta!

Kazy, the sausage symbol of Kazakhstan

Kazy is a Kazakh horse sausage that is also prepared in other Central Asian countries such as Uzbekistan and Kyrgyzstan. It is one of the symbols of the cuisine of the horsemen of the great steppes and nomads. Traditionally, the sausage is made with meat and fat from the ribs of the horse. It is usually seasoned with garlic, pepper and salt before being stuffed into natural casings.
The sausage can also be slightly smoked and served in slices. Although most popular as an appetizer, kazy can also be incorporated into a variety of dishes or stand on its own as a barbecue.

Käsekrainer, all the delicacy of Austria

Käsekrainer is an Austrian specialty, a sausage stuffed with small pieces of cheese. It is prepared with a mixture of pork, beef and a variety of spices, while the cheese used for the filling is Swiss Ementhal. Once stuffed, the sausages are smoked with apple wood, which gives this meat specialty a very specific and distinctive smoky aroma and flavor.
Often grilled, these traditional sausages are enjoyed with buns and a sauce (mustard, ketchup, horseradish...). This is the Austrian hotdog!

And you what sausages will you grill on your barbecue this summer. Feel free to share your recipes in the comments.