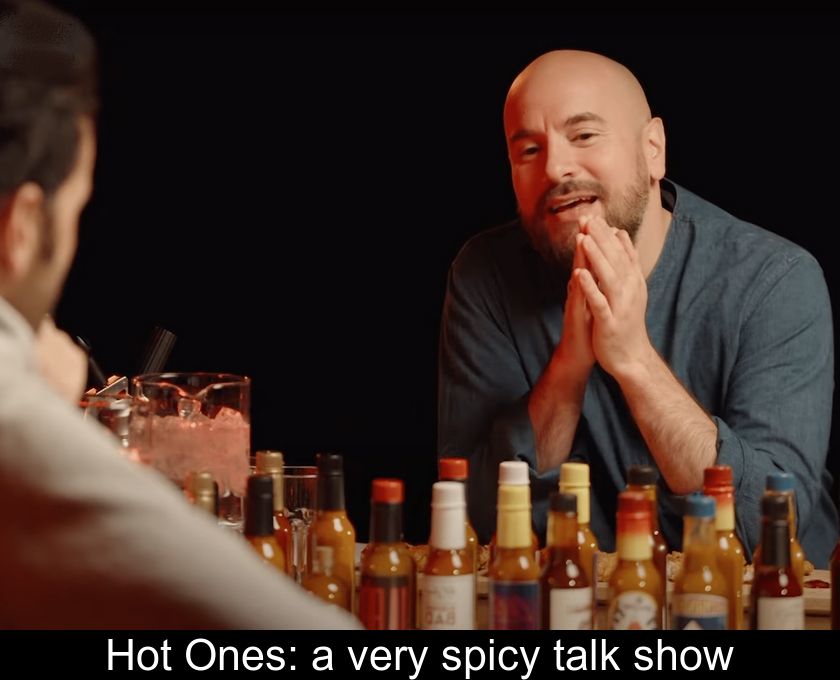 Do you know the TV show Hot Ones? This original talk show offers a concept that does not lack spice! In the French version broadcast since April 2022 on Canal+, comedian Kyan Khojandi receives a personality for a very spicy interview... literally!

A concept from the United States

Would Americans have more imagination than us to create original TV shows? The concept of Hot Ones seems to confirm it!

In this show, the host receives personalities to interview them... But, to spice things up a bit, the interview is accompanied by a tasting. Before each question, the host and his guest must eat chicken nuggets seasoned with increasingly spicy sauces.

In the French adaptation, it is the actor and comedian Kyan Khojandi revealed by the TV series Bref on Canal+ who leads the interrogation. This great lover of spicy food does not hesitate to put his palate and his stomach to the test to collect confessions from personalities from all walks of life.

He explains, 'I've always eaten spicy. It's an addiction the pepper, I eat it very often.' This explains why he seems to tolerate hot sauces better than his guests. Despite this, from question number 8 onwards, he too starts to feel unwell and teary-eyed, which leads to some hilarious exchanges.

If the concept of Hot Ones is very simple on the surface, reaching the end of the interview is much less so! There are only 10 questions in all but it's not easy for the guest to answer them with his mouth on fire.

For every question asked and every nugget tasted, the intensity goes to a crescendo and it's not just a picture. The hot sauces guests must ingest range from 1700 to over 1 million on the Scoville scale that measures the strength of chilies.

Whether or not they're used to eating spicy food, the personalities reveal themselves like never before during this truly unlikeable interview. The exchange ends in a climax with the hottest sauce in the world, nicely named... Apocal X !

As the interview progresses and the strength of the spice increases, this trial by fire acts as a truth serum on the interviewed personalities.

While the experience is hilarious for the viewer, it is not just for sadism. As in the bloopers, we always have a little fun seeing others suffer... But above all, we enjoy discovering the guests without a filter.

Even if some personalities like Marina Foïs seem to handle the spice better than others, all the guests reveal themselves despite themselves during the show. This interview/tasting is a real revealing of the personality of the celebrities who agree to play the game.

Jonathan Cohen who was the very first guest of the French adaptation even said at the end of the show: 'You experience physical stuff, you understand better how the human body works'.

In fact, the chili pepper causes pain on the tongue and causes the brain to secrete endorphins, which allows the guests to relax, even experience a form of euphoria. Kyan Khojandi takes the opportunity to ask them truthful questions about their backgrounds, passions and commitments and to pull out anecdotes as crisp as nuggets!

Eight episodes of 26 minutes each have already been filmed, with guests as diverse as Jonathan Cohen, Jérôme Commandeur, Jamel Debbouze and Izïa Higelin.

This talk show with a spicy sauce is broadcasted on Tuesday nights on Canal+. You can find the different issues in replay on YouTube and on MyCanal (see the link below).

← Previous Harry Potter Return to Hogwarts: 5 things to know about this special episode

Next → HPI series: soon an adaptation in the United States