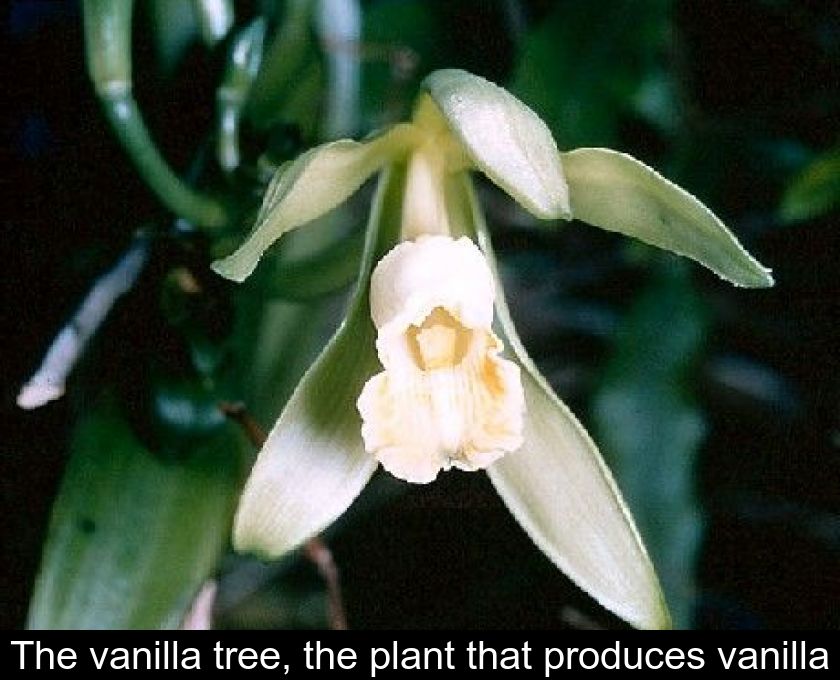 The Vanilla Tree, The Plant That Produces Vanilla

The plant that produces vanilla is a liana of the orchid family. We suggest you discover how this orchid is cultivated and how the most used spice in the world is produced.

The vanilla bean used in cooking is the fruit of the vanilla orchid or vanilla tree.

Before it can be used as a spice, this fruit, similar to a large green bean, undergoes several treatments: it is scalded, steamed, dried in the sun and then stored in crates protected from air and light for several months!

This long process requires a lot of work, which justifies the high price of this spice. It is indeed the most expensive spice after saffron...

Presentation of the vanilla tree

The plants that produce vanilla are themselves called 'vanilla' or 'vanilla tree'. They are climbing plants native to Mexico and Central America that belong to the Orchidaceae family and the genus Vanilla.

This genus has 117 species, of which only three are exploited to produce vanilla:
- Vanilla planifolia species, which is the most widespread, produces Bourbon vanilla
- Vanilla pompona produces a short fruit called vanilla
- Vanilla tahitiensis produces Tahitian vanilla which has special aromatic qualities.

These species are the only orchids whose fruit is edible.
They bloom from September to December and produce yellow-green flowers.

In their natural environment, vanilla orchids climb trees like vines and can reach 15 meters high.

The vanilla plant is a climbing orchid that needs to be staked. It has terrestrial roots and aerial rootlets that allow it to attach itself to the trunk of trees.
It is best to use a large diameter stake surrounded by moss.

Plant it in an orchid substrate and provide a sunny exposure, under bright light. Planting and repotting is done in the spring. Repot every two years or so depending on the growth of the plant.

This orchid thrives in a humid atmosphere, at temperatures between 15 and 20°C (12°C minimum). Keep the atmosphere moist by regularly misting your plant.

Water once a week with non-calcareous water and make sure that no water remains in the saucer. In spring and summer, add fertiliser to the water once a month.

The vanilla orchid can be propagated by taking cuttings from a piece of stem. It is sensitive to attacks by mealy bugs.

The first flowers appear on the vanilla tree after two years.
Once fertilized, they give oblong pods that look like large green beans.

In the wild, the fertilization of the vanilla flower is done by the melipone (a bee endemic to Mexico) or by hummingbirds. In the absence of these pollinating animals, artificial fertilization is carried out by putting pollen in contact with the pistil.

Madagascar is the leading producer of Bourbon vanilla, followed by the Comoros and Reunion Island: these three regions alone provide 80% of the world's production.

← Previous The stag horn plant or Platycerium: characteristics and maintenance

Next → Tomato diseases: symptoms and solutions