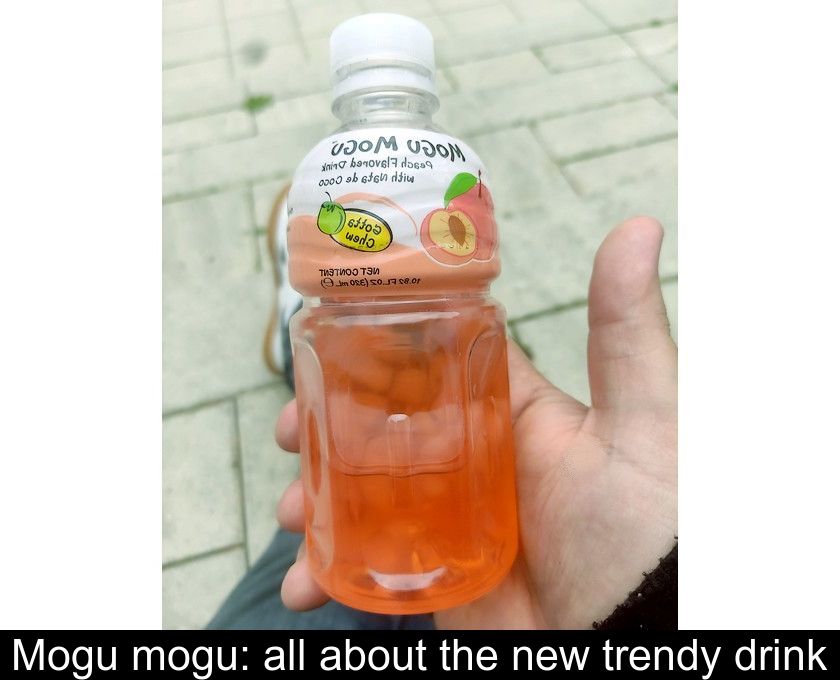 Mogu Mogu: All About The New Trendy Drink

Have you heard of mogu mogu? This strange sounding name is not a martial art or a new wellness method but a drink! This fruity drink with coconut jelly cubes is all the rage among young people. Here's everything you need to know about the new trendy drink.

The mogu mogu is an Asian drink made with water, sugar, fruit flavoring and coconut jelly cubes called coconut nata.

These little bottles with pieces floating inside come in all flavors like peach, mango, guava, lychee, passion fruit or raspberry and all the colors of the rainbow!

Inside the bottle, there is food and drink. Its tasting is quite an art because at the same time as you drink the colorful and fruity beverage, you have to eat the little cubes of fermented coconut jelly. The name 'mogu' comes from the Japanese verb meaning chew...

However, if you are wondering about the origin of this strange beverage, you should know that mogu mogu does not come from Japan!

Its country of origin is Thailand. This new drink from Asia was first marketed in Asian stores before gaining the mass distribution (Carrefour, Auchan, Franprix etc).

Its sales are constantly increasing in France so much so that it could dethrone the bubble tea originating from Taiwan which has been all the rage for a few years in our country.


3- What is its composition?

The particularity of the mogu mogu, they are not tapioca balls as in the bubble tea but cubes called nata de coco.

Originally, coconut nata is an Asian dessert originating from the Philippines and Indonesia. It is a kind of frozen made from fermented coconut water and sugar.

The pieces that float in the drink do not owe their gelatinous consistency to pork gelatin. Therefore, you can consume it even if you eat halal. For the same reason, this drink is also suitable for vegetarians and vegans.

Despite its exotic origin and appearance, the mogu mogu can now be found in the supermarket. There is something for every taste since distributors in France offer no less than a dozen different flavors!

Teenagers love it for its strange and surprising consistency. Fans of this beverage appreciate the fact that this preparation is drunk and eaten at the same time.

This Thai drink surfs on the trend for all the products coming from Asia like the bubble tea from Taiwan but also the sushis, the fried noodles and the Poké bowl for example.

This product also owes its popularity to the current craze for all coconut-based preparations. The price is quite high. This flashy colored beverage costs between €1.50 and €2.50 per 320 ml bottle.

If you've already given in to the mogu mogu trend or want to try this new trendy drink, know that you must not abuse it.

Indeed, this beverage from Thailand is a sweet drink whose composition is really not natural.

The high concentration of sugar (around 12%) probably explains why teenagers have become addicted to this exotic beverage. In addition, each flavor contains food additives (dyes and preservatives) that are not without health risks if you consume a lot of them.

With its sugar content and flavors, this drink is more like a soda than a fruit juice, despite what the packaging would have us believe... The Yuka app actually gave it a score of 0/100.

You will have understood, this new drink is a sweet pleasure to be granted from time to time and to be drunk in moderation.