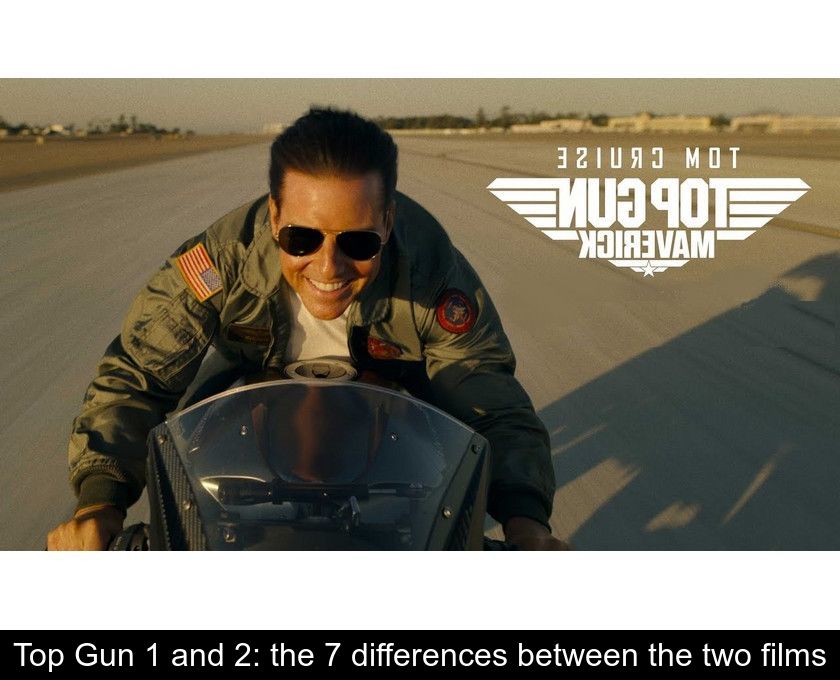 Top Gun 1 And 2: The 7 Differences Between The Two Films

Thirty-six years after the first film, Top Gun Maverick is breaking records at the worldwide box office. If you loved the first movie and you're still hesitating to go see the sequel, you should know that this new movie is not just a pale copy-paste of the 1986 cult movie. To give you a taste of this movie, we played the game of the 7 differences between Top Gun 1 and 2.

In this sequel, the character of Maverick played by Tom Cruise returns to Top Gun Aviation School, but of course it's not as a student anymore!

It's with the instructor's hat on that this seasoned pilot is called back to school to train the Navy's elite pilots for a very special mission.

Rest assured, despite his new job, the character of Pete 'Maverick' Mitchell has lost none of his rebellious streak.

While the plot of Top Gun relied heavily on the rivalry between Maverick and Iceman played by Val Kilmer, in this sequel the two pilots are presented as old friends.

Iceman, now an admiral and commander of the U.S. Pacific fleet, pistons Maverick to make a comeback as an instructor in the pilot training center.

Actor Val Kilmer, who has lost his voice to throat cancer since 2017, makes an emotional return in this film. The reunion scene with Maverick was made possible thanks to artificial intelligence that allowed the actor's voice to be reconstructed.

In this sequel, Maverick is no longer in a relationship with the instructor and astrophysicist Charlie as in the previous Top Gun. Remember:

Actress Kelly McGillis who played this character was not called back for this shoot. It is another actress, Jennifer Connelly, who plays Penny, Maverick's new girlfriend.

This sequel focuses on the reunion between the pilot and Penny, an ex who is both single mom and bar owner.

But the most important of the 7 differences between Top Gun 1 and Top Gun 2 is the appearance of a new character who plays a central role in the storyline: the young Bradley 'Rooster' Bradshaw.

This pilot is none other than the son of Goose, Maverick's friend and navigator, who died accidentally during a drill in the previous film.

As a reminder, this character was played by Anthony Edwards who had his moment of glory on television in ER as Dr. Greene

The production found an actor who looks a lot like him, Miles Teller, to play Rooster, this young pilot torn between his resentment towards Maverick and his sense of duty.

The filial and conflicted relationship between Tom Cruise and this new character is central to the film's plot.


5- A new recruit among the pilots

Another novelty worth noting is that for the first time there is a young woman in the team of elite drivers that Maverick is responsible for training.

This character nicknamed Phoenix is played by actress Monica Barbaro.

She brings a new feminine touch to the Top Gun school and testifies to the evolution of mentalities, even though the U.S. Navy has been recruiting women pilots since... 1974!

In this saga where planes are also the heroes of the movies, it should be noted that the pilots of Top Gun 2 do not fly with the same machines anymore.

The students of the aviation school no longer fly F-14s as in 1986 but Boeing F-18 Super Hornet. Enemy Migs have also been replaced by new generation aircraft.

Nostalgic fans of the first opus will still have the pleasure of seeing Maverick flying an F-14 again at the end of the film, but we won't tell you more!

Of course, the opening credits have not changed, to the delight of fans who will immediately find their bearings at the beginning of the film.

However, it should be noted that Lady Gaga has signed a song for the film Top Gun Maverick.


Less sexy than Take my breath away by the band Berlin, the unforgettable ballad that made the first film's soundtrack a hit, this new love song called Hold my hand accompanies the love story between Maverick and Penny.

If you want to continue playing the game of differences and similarities between the two films, we recommend watching the comparison video below. It's funny and above all very successful!

Next → Ultime combat: an exhibition on martial arts at the Quai Branly Museum