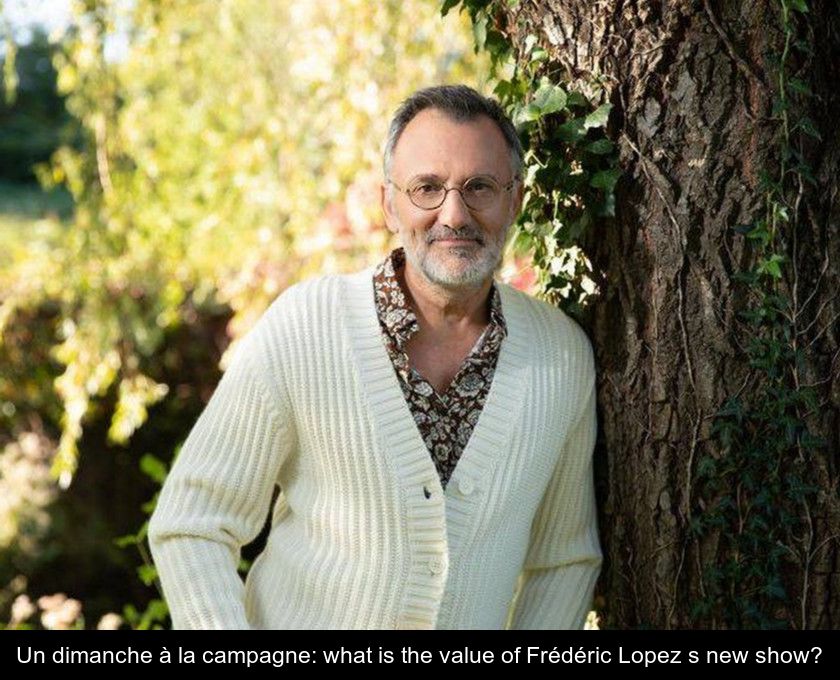 Since October 23, 2022, Frédéric Lopez has made his comeback on France 2 with a weekly program called Un dimanche à la campagne. Here is what we thought of this new program, with a not so innovative concept...

For his big return to television, Frederic Lopez chose to invite personalities to spend A Sunday in the country.

As the title suggests, the atmosphere of this new show is rural and we see three guests arrive in a boat in a large country house. Does this sound familiar? It's perfectly normal! The 55-year-old host fully assumes the resemblance with the show La Parenthèse inattendue, which he hosted between 2012 and 2014.

The similarities between the two shows are such that the press was quick to make a rather amusing play on words, stating that Frédéric Lopez returns 'in familiar territory'.

For the new program Un dimanche à la campagne, Frédéric Lopez and his teams changed address. They put their cameras in a beautiful country house located not far from Fontainebleau and with a large garden.

However, fans of La Parenthèse inattendue will find there the same bucolic and cosy atmosphere as in the previous show. The host has brought out his famous cardigans and cozy plaids again, to the delight of guests and viewers who regretted the end of the previous program.

This new Sunday show pushes the resemblance to the point of making the guests arrive in a boat and disembark on a pontoon, a nod to La Parenthèse inattendue that can amuse... or annoy.

In addition to the form, this new show also has similarities with La Parenthèse inattendue on the substance. Once again, Frédéric Lopez invites personalities to the countryside to make them reveal themselves for a weekend.

An attic filled with vintage toys provides a setting for confidences about their childhood, while the activities shared over the course of two days (walks, dinner preparation) reveal new facets of the participants.

For his return to the air after four years of absence, Frédéric Lopez wanted to offer a good mood program that gives his guests time to tell their stories.

When he left the presentation of Rendez-vous en terre inconnue in 2018, Frédéric Lopez did not think he would ever do television again, but the director of programs at France Televisions Anne Holmes convinced him to return to the small screen.

This comeback with a concept very similar to La Parenthèse inattendue is a successful bet if we are to believe the ratings, with an average of 1.46 million viewers over the first three issues and 12.2% market share.

Viewers, who had missed the host and his benevolent style, seem to have embraced this new Sunday appointment, in a time slot where Frédéric Lopez succeeds Michel Drucker and Sophie Davant.

The program Un dimanche à la campagne is all the more interesting because the production is keen to reunite personalities from different backgrounds and generations. The first issue of this program thus orchestrated the meeting between the duo of rappers Bigflo and Oli and actresses Charlotte de Turckheim and Barbara Schulz.

During the weekend, the guests overcome their differences in age and universe and generally find common ground by evoking their personal and artistic paths. The path that took them from an ordinary life to stardom is generally inspiring. Enough to make viewers want to follow their own dreams...

For those who have not yet discovered this show, note that Frederic Lopez invites you to the campaign every Sunday at 4:55 pm on France 2.