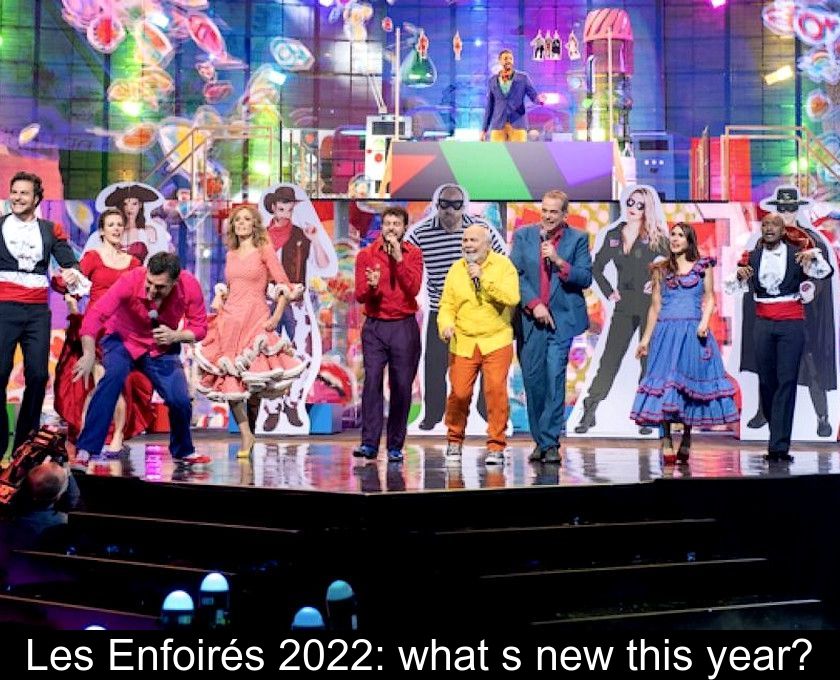 The concert to benefit the Restos du cœur will be broadcast on Friday 4 March at 9:10 pm on TF1. This show entitled Un air d'Enfoirés was recorded without an audience but with big means that promise to the viewers a visually grandiose event. Here are 5 things to know about the Enfoirés concert.

1- A show recorded without an audience

This year again, Les Enfoirés 2022 had to do the show without an audience due to the health situation.

The show entitled Un air d'Enfoirés was recorded last January in Montpellier in the middle of the variant omicron wave.

The gala, to be discovered on Friday, March 4 at 9:10 pm on TF1, was indeed recorded from January 18 to 21 at the Sud de France Arena in Montpellier.

But the show was maintained at all costs. As every year, the show will feature covers of recent songs by Grand Corps Malade, Barbara Pravi or Clara Luciani, but also classics by Jean-Jacques Goldman, Ophélie Winter or Fabienne Thibeault.

As for the anthem of the Enfoirés this year, Il y aura toujours un rendez-vous, it was written and composed by Jacques Veneruso. This singer-songwriter, little known to the general public, is a close friend of Jean-Jacques Goldman. He has worked with the greatest artists: Florent Pagny, Michel Sardou, Celine Dion and Johnny Hallyday.

2- A sparse troop by Covid

Still because of Covid-19, many artists who had confirmed their participation in this concert could not join the troupe of Enfoirés 2022.

The artists had to take a PCR test before performing on stage. That's why Jenifer, Christophe Maé, Claire Keim, Jeff Panacloc and Michaël Youn, tested positive, had to give up participating in the gala.

The production had to revise its plans in just a few weeks because the show had initially been planned to include spectators... In particular, the number of sketches on stage had to be reduced, because they often did not work without the laughter of the audience.

In the end, 36 renowned artists participated in 22 tableaux full of fantasy and magic to offer viewers a clever mix of emotion and laughter.

In spite of the health situation, the Enfoirés 2022 troupe ensured the show! It was a pleasure to welcome new personalities, but also to see the return of emblematic figures of this charity concert.

This 2022 edition will be marked by the return to the stage of the musician Catherine Lara and the singer Garou who are back with the troupe of Restos du coeur after several years of absence.

Among the new recruits, you will recognize big names in sports, music and the conquest of space, I mean of course Kylian Mbappé, violinist Renaud Capuçon and astronaut Thomas Pesquet.

On the singer side, the Enfoirés welcome this year the singer Anne Sila revealed by The Voice, the group Ofenbach, Joyce Jonathan, Jérémy Frerot, Camélia Jordana as well as the actor Arnaud Ducret.

For the first time during the Enfoirés 2022, small skits were filmed backstage.

They were filmed by a second team led by a former director of Les Guignols de l'infos in order to replace the skits on stage.

This novelty will allow viewers to invite themselves behind the scenes of the show and have a 360° vision of this show.


5- Cameras close to the artists

Another difference with the previous editions is that the realization had to adapt to the sanitary conditions.

For these Enfoirés 2022 without an audience, the number of wide shots was reduced in favor of tight shots closer to the artists. Two cameramen were placed on stage to give more rhythm to the show.

In addition, in order to enrich the 22 tables proposed in this gala, the production did not skimp on the means: it was equipped with a giant screen of more than 250 square meters!

The result promises to be visually stunning and should delight the program's 10 million followers.


They count on you

The Enfoirés 2022 is therefore shaping up to be a great vintage despite a shoot without an audience. From the day after the concert is broadcast on TF1, each CD or DVD sold will help distribute 17 meals.

In 2021, Restos du cœur distributed more than 142 million meals and welcomed more than 1.2 million beneficiaries. The Enfoirés represent 10% of the budget of the association created by Coluche in 1985.

More than ever this year, they are counting on you!

← Previous Les Combattantes: what is the new TF1 series worth?

Next → Les Potagers de Julie : Julie Andrieu goes from the kitchen to the garden