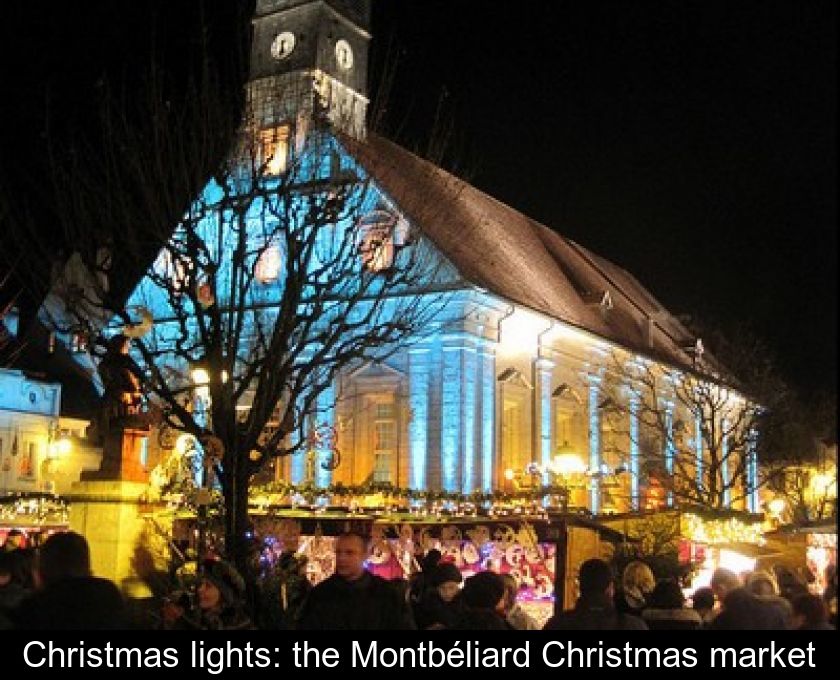 From the end of November to the end of December, the town of Montbéliard hosts one of the best illuminated Christmas markets in France. This market, rich in illuminations and regional products, is rightly called the Christmas Lights! In this town near Alsace and Germany, the purest tradition of the Christkindelmarkets is respected, making the Montbéliard market a must-see event in Franche-Comté.

Every year from the end of November the city of Montbéliard is adorned with magnificent illuminations on the occasion of the well-named Christmas Lights!

The emblematic monuments of the City of Princes such as the castle of the Dukes of Wurtemberg, the Halles or even the Temple Saint-Martin are dressed in light during the Advent period.

These festivities, which last until the end of December, are placed under the aegis of Aunt Airie (the good fairy of the Montbéliard region), Saint Nicolas and Père Fouettard.

On this very authentic Christmas market, regional products take pride of place on the stalls: sausages and cancoillotte rub shoulders with chocolates, honey, gingerbread and other cakes. Enough to make all food lovers agree!

In addition, each year, the Christmas lights welcome a guest country or region.

The next edition of Christmas Lights takes place from November 27 to December 28, 2021.

In addition to the illuminations on every street corner, the festivities include an authentic Christmas market and an entertainment program for young and old.

The wooden chalets of the Christmas market welcome more than 180 craftsmen in the historic city centre, at the foot of the Temple Saint-Martin, the oldest Lutheran church in France.

In 2019, the Pays de Savoie was the featured region. This year, the guest of honor of these festivities is Franche-Comté. Its land and know-how will delight visitors.

The Montbéliard Christmas Lights take place from 27 November to 28 December 2021.

Hours of the Allée gourmande space, square Sponeck: the stands will close one hour later than the times presented above (except on December 24, closing at 6pm).

Next → Christmas markets: 4 European cities famous for their markets