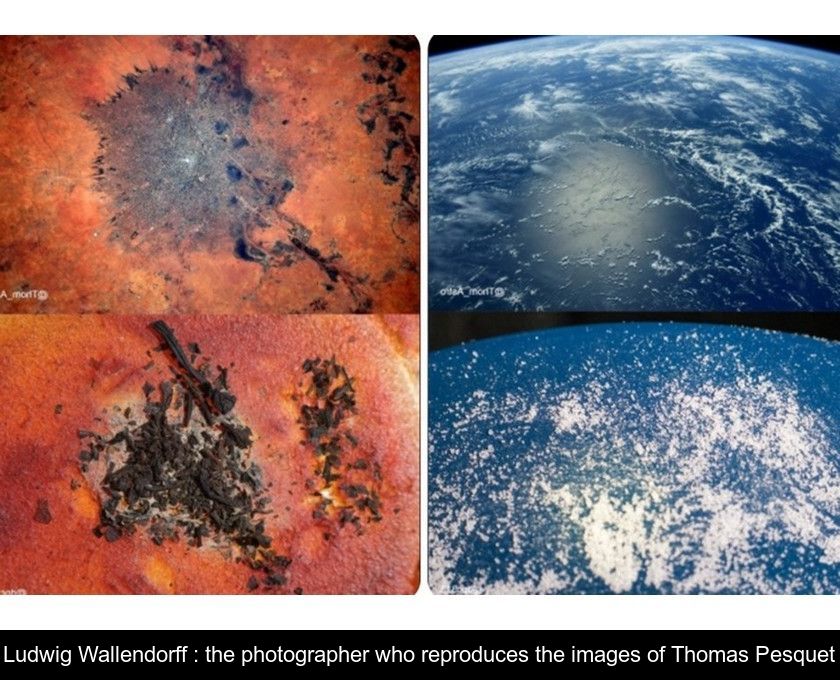 Ludwig Wallendorff : The Photographer Who Reproduces The Images Of Thomas Pesquet

Every picture taken by astronaut Thomas Pesquet during his mission on the ISS has caused a stir on social networks. But did you know that these images were a source of inspiration for professional photographer Ludwig Wallendorff? He reproduced the pictures taken from space with a lot of inventiveness and... ingredients from his kitchen!

A copycat left on Earth

Thomas Pesquet, who just spent 6 months aboard the ISS, shared some incredible images of our planet as seen from space.

Just like during his previous mission aboard the International Space Station, the French astronaut's photos fascinated the whole world and in particular the photographer Ludwig Wallendorff.

Inspired by these space images, this professional photographer set himself a big challenge: reproducing the photos of Thomas pesquet taken from space, without leaving Earth and with the means on board.

Since June 30, he has posted on social networks several reproductions of the astronaut's photos, only made with everyday products, such as cocoa or herbs from Provence!

Ludwig Wallendorff explains that he got the idea because he had seen some of Thomas Pesquet's photos go by and thought to himself, 'here, this looks like such and such'.

When you do not have a rocket, use your imagination. In #At_Home_Astro, I try to remake at home some of the pictures that @Thom_astro takes from the ISS. This gallery will be updated weekly throughout his mission. pic.twitter.com/dBt2XFXZwJ

If you want to find the images created by Ludwig Wallendorff during Thomas Pesquet's mission, search on Twitter the hashtag #At_Home_Astro!

This hashtag (which is itself a parody of the French astronaut's official account @Thom_astro) says it all: you can dream of space and its wonders from home!

And as the photographer states so well on Twitter: When you don't have a rocket, you have to have ideas :-)

For each image he creates, Ludwig Wallendorff shows us the original he wanted to imitate but also the tricks he used (objects, supports and various powders) to achieve this result.

The behind-the-scenes stuff is usually surprising, unexpected and hilarious.

#At_Home_Astro, Last episode! When you do not have a rocket, use your imagination. Mission Alpha comes to an end, so do the regular episodes but I will post some more from time to time. Thanks for your support, welcome home @Thom_astro and see you soon! pic.twitter.com/5FNpcKFNQm

A project supported by Thomas Pesquet himself

When he started last June, Ludwig Wallendorff had set himself the goal of keeping the pace until the end of the Alpha mission in October 2021.

And he has succeeded in his goal, since he has never run out of ideas for imitating the photos of his favourite astronaut.

He also gained a very special follower on social networks! His pictures full of creativity and humor have indeed attracted the attention of Thomas pesquet who shared his work with enthusiasm on social networks.

Stop what you're doing and go follow @dpc313, not only because he recreates all my shots at home and it's hilarious, but also for all his other photos. The man is a legit photographer. Respect! #At_Home_Astro https://t.co/qwkEiAyctu

In his latest post under the hashtag #At_Home_Astro, the French astronaut even offered on Twitter to exhibit with him one day.

What do you mean last episode?! But that's just me getting used to it... thanks for making the whole crew laugh regularly, with talent and creativity! Next episode: we exhibit together? #at_home_astro #MissionAlpha https://t.co/cxZe5R8af1

The photographer, who is decidedly keeping his feet on the ground, is the first to be surprised at the notoriety the project has brought him:
'I didn't expect such a craze, such a reaction from people. It's not because you find something funny at home in your living room that you expect so many people to find it funny too.'

← Previous Love Songs: enter the intimacy of photographers at the MEP

Next → MAP Toulouse: the festival for photography lovers