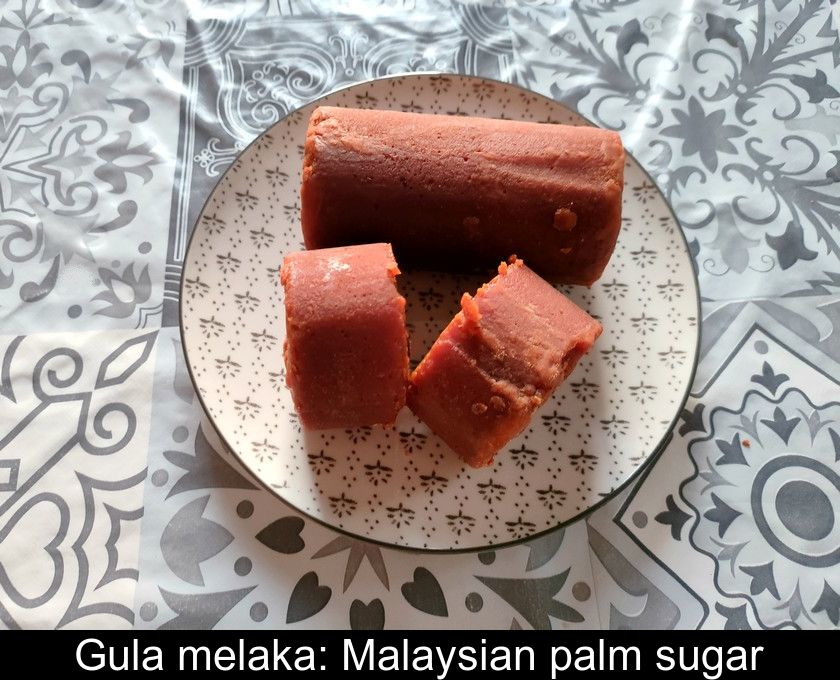 If you travel to Southeast Asia, especially Malaysia, you will probably taste desserts made with gula melaka. Here is everything you need to know about this brown colored sugar with a good caramel taste.

1- Gula melaka is a palm sugar

Among the different natural sugars, we hear a lot about coconut sugar from the coconut flower.

In Malaysia, this palm sugar with its beautiful brown color and good caramel taste is called gula melaka.


2- It is usually derived from the coconut flower

Although it is possible to make sugar from a variety of palm species, gula melaka is most often from the coconut palm or Cocos nucifera.

The raw material used to make this unrefined sugar is more specifically sap extracted from the flower buds of the coconut palm.


3- The production method is always the same

In the different countries of Southeast Asia, the method of production of palm sugar is always the same.

The sap thus collected is then boiled at low temperature until it thickens and caramelizes.

The caramelized sap can be sold in bottles as syrup. It can also be solidified in bamboo tubes and marketed as cylindrical pieces of gula melaka, as in the photo above.

Depending on the sap used, the method of manufacture and the region of origin, the taste may vary.

The color of this Southeast Asian coconut sugar can also range from golden brown to dark brown. This is why Indonesian sugar has a different hue than its Malaysian equivalent.


4- It is named after the state of Malacca in Malaysia

In Southeast Asia, there are different types of sugar from coconut flowers.

Malaysian sugar probably gets its name from the state of Malacca (or Melaka in Malay), where it is thought to have originated.


5- It is an essential ingredient in many Malaysian desserts

Palm sugar is a very common ingredient in Malaysian cuisine. It is used in some savory dishes and in most typical Malaysian desserts.

Among Malaysian desserts that contain palm sugar, we can mention
- the famous chendol mixture of crushed ice, coconut milk, palm sugar and green rice vermicelli colored with pandan
- ondeh ondeh, a ball made of glutinous rice flour filled with sugar syrup and coated with grated coconut
- gula melaka sago a pudding made of sago pearls in coconut milk and coated with sugar syrup
- kuih kosui a small steamed cake sprinkled with grated coconut which owes its brown color to Malaysian palm sugar. See the picture below (Copyright: Zhongwenqi).

In most Malaysian desserts, palm sugar is combined with pandan, a plant whose leaves give a beautiful green color and a distinctive aroma to local sweets.

If you visit Malaysia, you will soon discover that pandan and gula melaka are the two mainstays of pastry in this country!

Remember to bring back this palm sugar in your luggage in the form of cylinders: you can grate it in your yoghurts and other desserts or melt it in a pan with a little water to obtain a syrup and coat your desserts.