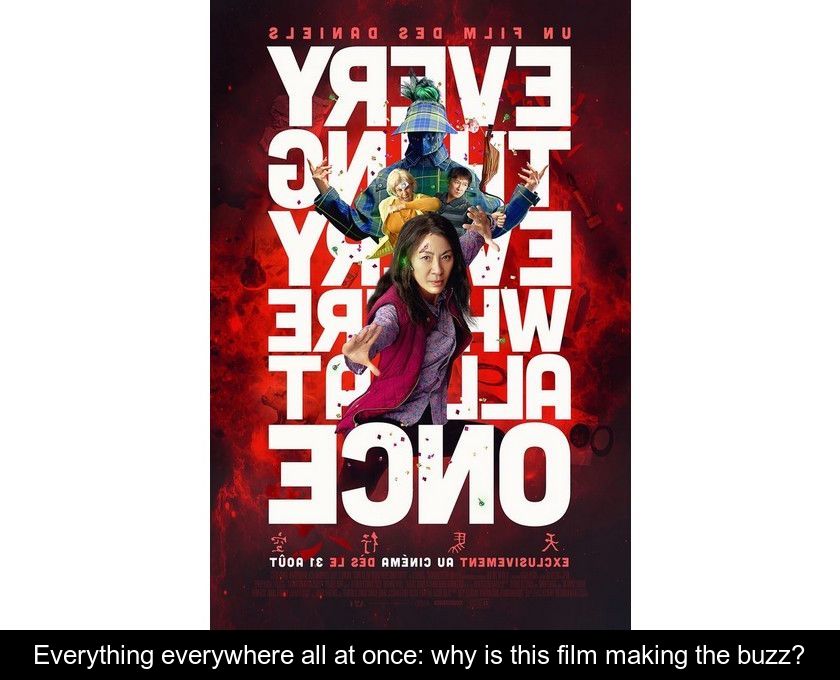 Everything Everywhere All At Once: Why Is This Film Making The Buzz?

The movie Everything everywhere all at once released on August 31, 2022 in France was a real hit in the United States and then worldwide. We explain why this crazy sci-fi movie is a hit with teenagers.

The phenomenon film of the year

The film Everything everywhere all at once has been a worldwide hit since last spring. Since its release in the United States last March, the film has met a dazzling success with 15-20 year olds, to the point of being called 'phenomenon of the year' by U.S. film sites.

The feature film, which has also been dubbed the 'Matrix of millennials', stayed in the top 10 of the U.S. box office for 16 weeks, buoyed by word-of-mouth and buzz on social networks.

Unusually for an SF film produced by an independent studio (A24), outside of the Hollywood majors, it surpassed the $100 million mark in worldwide revenue on July 31.

And yet nothing suggested such a global success. The title Everything everywhere all at once is so long that the film was quickly designated on social networks by a diminutive or rather an acronym: EEAAO!

This feature film did not have the best assets to attract the crowds since it is signed by two unknowns, Daniel Scheinert and Daniel Kwen known as 'the Daniels'. It features a cast of sexagenarians who no longer look like young leads, starting with Michelle Yeoh (Crouching Tiger, Dragon, Tomorrow Never Dies) in the lead role ...

The plot, whose heroine is a Chinese immigrant living in California and owner of a laundromat, is enough to give you a headache as it navigates between eras and different universes, like The Matrix with a kung-fu sauce.

As the story is impossible to summarize, here is a teaser that will give you a small glimpse of the phenomenon film:

The EEAAO outpouring on social networks is partly explained by the completely crazy script of this film mixing kung-fu and science fiction! This crazy feature film revolves around a theme that is very much in vogue right now, the concept of multiverse.

During the 2 hours and 20 minutes that the film lasts, action scenes, jokes and crazy situations follow one another at a frantic pace. This frenzy may leave you feeling too much and too fast but it has the merit of offering something amazing, funny and innovative.

To save the multiverse threatened by an evil force, Michelle Yeoh must constantly navigate between various dimensions and versions of herself. The theory of the multiverse is exploited in a clever and very funny way, to the great joy of the spectator.

Everything everywhere all at once is a blockbuster full of surprises. The recipe for its success is an explosive mix of kung-fu fights, family history, Chinese cuisine and reflections on the meaning of life!

Will you let yourself be carried away by this whirlwind? In spite of its UFO appearance, this film succeeds in a tour de force: to make the spectators get attached to the characters and that emotion emerges from the chaos of the multiple dimensions.

← Previous Death is not an end: an exhibition at the Museum of Archaeology in Nice

Next → Exhibition in Nice: discover the greatest works of art in Playmobil version