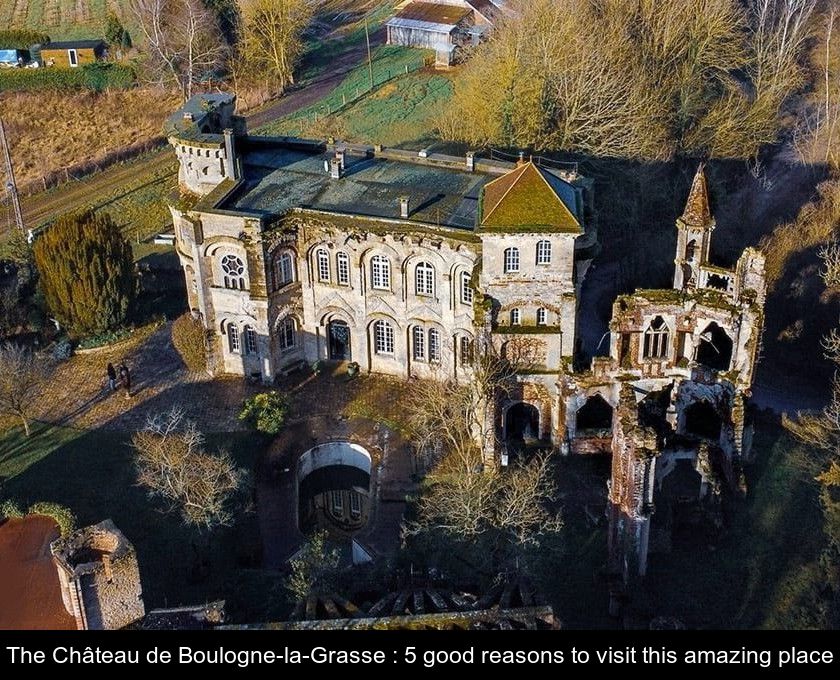 After being saved from abandonment by thousands of co-hosts mobilized by the start-up Dartagnans, the Château de Boulogne-la-Grasse will open its doors to the public for the very first time in July 2022. Here are 5 good reasons to visit this unusual place.

The Château de Boulogne-la-Grasse, located an hour outside of Paris, had been derelict for several years when start-up Dartagnans launched a rescue campaign.

This crowdfunding campaign went around the world and mobilized nearly 6,000 Internet users from 57 different countries to raise the amount needed to save the castle.

Some €620,000 was raised in order to buy the castle and save this architectural treasure dating from the early 20th century.


2- Its architecture is remarkable

The Château de Boulogne-la-Grasse is an architectural folly built on the border of the Oise and the Somme, at the initiative of a wealthy Belgian owner, Charles de Boulogne.

He bought the title of count and had this unusual castle built on the remains of the castle of the Lancry family. To build this fairy tale castle, he gave free rein to his fantasy and did not hesitate to mix gargoyles, Gothic and Romanesque elements, Latin inscriptions, sculptures of saints and references to the Arthurian legend.

This abundance and surprising mix of influences are reminiscent of another unusual monument: the Facteur Cheval's Ideal Palace! The castle houses hundreds of hidden treasures, messages and symbols to decipher.

The most surprising aspect of its architecture is undoubtedly the use of reinforced concrete for the shell and for the sculptures. Before the war, this architectural phantasmagoria was in fact a real tourist attraction. Many postcards published at the time testify to the state of the castle in its heyday.

This unusual castle, which is unlike any other, is nestled in the hollow of a mysterious forest. It is also hung by the memory of the Great War, whose soldiers it hosted.

A few months after the beginning of the First World War, the front moved to the Oise and the castle was requisitioned by the French army. It is then transformed into a parking and observation camp for the Poilus.

In 1915, the French soldiers even received a visit from Marshal Joffre, President Poincaré and King Albert I of Belgium. For four years, hundreds of men occupied the castle, trained there and tried to survive in this troubled period.

In 1918, the village of Boulogne-la-Grasse and its castle were bombed and taken by the German army. Six months of intense fighting will leave indelible scars on some parts of the castle and its outbuildings.

Visiting the Château de Boulogne-la-Grasse might also make you want to join the Dartagnans community.

This startup was founded in 2018 and in just a few years has gathered the largest community of castle saviors in the world. It federates more than 40,000 co-chateaux from 125 different countries.

This international community participates in the collective purchase, safeguarding and development of castles previously doomed to abandonment. Thanks to this innovative solution, heritage treasures that do not benefit from state aid can be saved and developed.


5- It will exceptionally open to the public for one day

If the arguments stated above have made you want to discover the Château de Boulogne-la-Grasse, you should know that the building will open its doors to the public for the first time on Sunday, July 10 from 10am to 5pm.

The mayor of the town, the janitor of the castle and the team of Dartagnans will exceptionally welcome you for a day to help you discover this monument full of history and its restoration project.

If you can't make the trip that day, know that you can also become a co-châtelain for only 59 € and benefit from a tax exemption as well as free entrance for life for free visits of the building.

To learn more, we invite you to visit the Dartagnans website below

← Previous Singing: what is gospel music?

Next → The Cité du Vitrail : a cultural place to discover in Troyes in Champagne