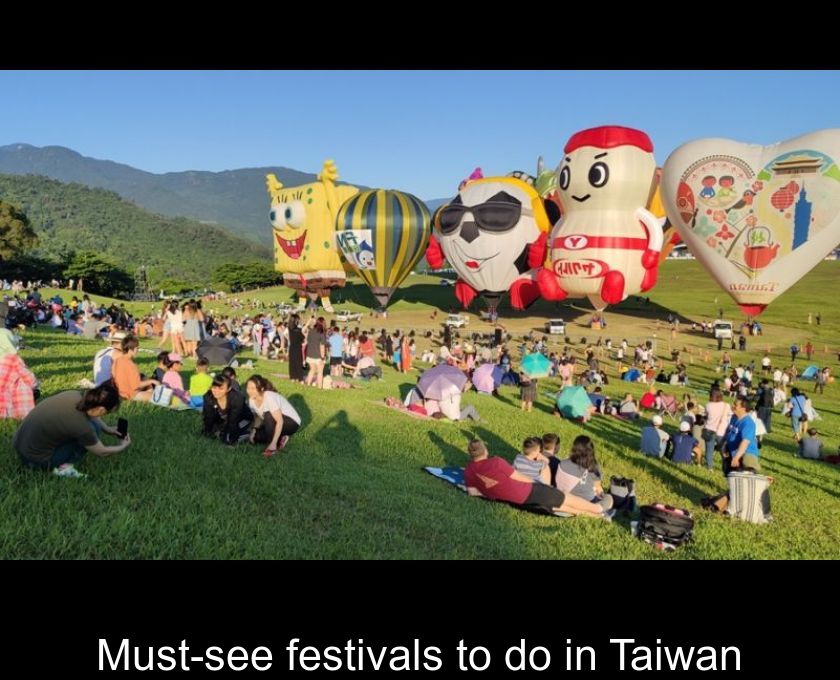 Must-see Festivals To Do In Taiwan

There are many festivals held throughout Taiwan, and while some like the Dragon Boat Festival are celebrated around the world, there are others that you can only experience on the island. Here are the most popular festivals in Taiwan.

The Pingxi Sky Lantern Festival is one of the most famous festivals in Taiwan and attracts thousands of people. Every year during the lantern festival, people head to the small village of Pingxi to throw sky lanterns with messages for the gods into the night sky. These are messages of love, good health, success in work... In short you can pray for just about anything as well as all the gods you want!!! The flight of lit lanterns in the dark sky makes the moment magical. It is a sight to behold at least once in a lifetime.

One of the most unusual and certainly one of the most dangerous. festivals in Taiwan is the fireworks festival. Indeed those who attend intentionally put themselves in the line of fire. People dress up in all the protective clothing. they can find and walk among the structures filled with thousands of firecrackers and fireworks. An experience for the most daredevil among you!

This festival was launched to promote the tradition of fire fishing and help stimulate the fishing trade. Indeed this ancestral technique tends to be lost and the younger generations did not even know what it was about. The organizers of the festival organize a variety of events, but by far the most popular is the opportunity for amateur photographers to go on one of the fishing boats and witness the entire fire fishing process. The fishermen use sulfuric rocks, which they set on fire, to bring the sardines to the surface. It is spectacular and original.

This festival takes place from November to March every two years, when millions of Euploea butterflies arrive in the Maolin area to spend the winter. This is one of the two welcoming places for migratory butterflies in the world during the winter period. There is no specific date, but you can take advantage of this period to see millions of butterflies in one place. Which is quite rare.

Considered one of the most important cultural events in Taiwan, this festival started in 2004 to promote local traditions such as the worship of the goddess Mazu, martial arts, arts and industry. It's an incredibly diverse festival with lots of activities, food stalls and you're bound to find something you'll enjoy and want to do.

Long ago, the men of Neimen often had to protect themselves from local indigenous tribes who plundered their land. They became experts in defending their land and passed on their skills from generation to generation. Today, Kaohsiung District is home to 54 parades that honor the military tradition. The Song Jiang Battle Array brings together 18 of these parades in one place at one time. It is a colorful, festive festival that showcases very very old traditions of the island.

Puppets are an integral part of Chinese and Taiwanese folklore and are celebrated at this unique festival held in Yunlin County. Exhibitions and puppet shows enliven the event. You can also experience shadow puppet shows. This is an opportunity for each puppet theater school to compete in a friendly competition and be recognized with prizes and awards.

What a festival with a mysterious or evocative name all depends on how you take it. This festival also known as Mala-Ta-Ngia, is held in southern Taiwan. It is an opportunity for members of the indigenous Bunun tribe to show off their archery skills by shooting the ears of animals pinned to trees. This is an old tradition of the Bunun tribe, which allowed the tribal warrior to show off their dexterity and show off to young women. In recent years Taiwan is reviving its ancient traditions and trying to enhance the various festivities of its aboriginal tribes.

Held on one of Taiwan's most beautiful stretches of sand, this festival is a popular day trip for Taipei residents, and increasingly popular with tourists. It consists of a simple walk among the sand sculptures. Some of the works required a titanic amount of work and several hours or even days of labor and more and more artists are participating in the event and trying to offer their interpretation of the art of sculpture. Unfortunately these sculptures are ephemeral and you have to be there on the day to fully enjoy them. But the advantage is that every year the works change and you can come back every year!

Next → Nice Carnival 2022: our top 5 most beautiful floats