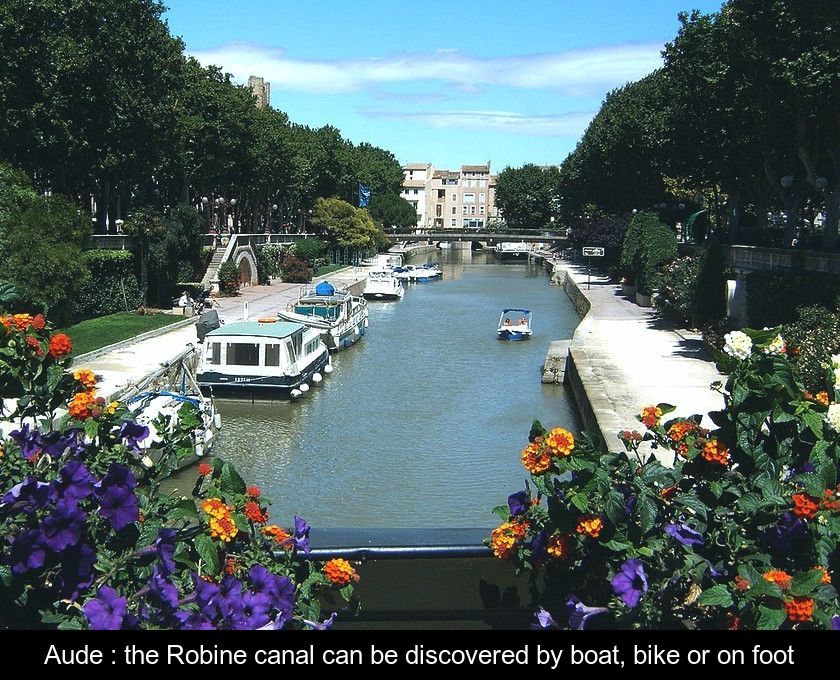 Aude : The Robine Canal Can Be Discovered By Boat, Bike Or On Foot

Less known than its big brother the Canal du Midi, the Canal de la Robine also offers magnificent possibilities for walks along the water. We suggest you to discover the unknown attractions of this canal which can be crossed by boat of course, but also by bike or on foot, along the towpath.

A canal classified by Unesco

The Canal de la Robine that runs through the city of Narbonne is a ribbon of water connecting the Aude to the Mediterranean Sea. Together with the Canal de Jonction, it constitutes a lateral branch of the Canal du Midi; these three works were in fact inscribed together as a UNESCO World Heritage Site in 1997.

The canal begins at the edge of the Aude River and heads toward Narbonne. The river port of Robine located in Sallèles d'Aude, at the mouth of the Jonction Canal, has a capacity of 80 boats. Six locks, the largest of which is up to 4.50 m deep, punctuate the navigation on the Robine canal.

Once reserved for trade, this canal has become a tourist attraction. It is easy to rent an electric boat or barge to navigate the calm waters of this canal, which offers a less crowded alternative to the Canal du Midi.

The canal skirts the Bages and Sigean ponds and the Sainte-Lucie Island nature reserve before ending its course in the Mediterranean Sea at Port-la-Nouvelle. The speed is regulated and the navigation is done in slow tourism mode! The crossing can take up to 10 hours to cover 32 km.


An original point of view on the local heritage

No matter how fast you sail, this little-known canal invites you to stroll and discover. One can see architectural curiosities, such as the Pont des Marchands in Narbonne, one of only two inhabited bridges in France.

Navigating on the Robine Canal is moreover an original way to discover the city of Narbonne. Just rent an electric boat for a few hours to get a new perspective on the city's built heritage.

Along the water, you can pass under bridges, walk along the theater, see the Conservatory or the former library that has become the headquarters of the Tourist Office...


A royal road for bicycle touring

If you don't feel like going to sea and don't want to rent a barge or an electric boat, you can also practice bicycle touring along the Robine canal.

It is very easy to rent a bike on the spot and follow the old towpath for the time of a nice family bike ride. The towpath has been developed into a greenway from the center of Narbonne to Port-la-Nouvelle. You can therefore pedal quietly in the shade of the plane trees or simply walk.

This path will quickly lead you from Narbonne to wilder landscapes. With a bit of courage and the strength of your calves, you will be able to cycle either to the coast, or to the charming commune of Gruissan or to the pond of Sigean.


An island of birds

If you opted for the boat, note that the last lock will take you to Isle Sainte-Lucie, a protected nature reserve nestled in the middle of the ponds that separate Port-la-Nouvelle from Gruissan.

A true haven of peace for migratory birds, this island is classified as a regional nature reserve. If you know how to be discreet, you will be able to meet oystercatchers, white stilts and avocets.

The local biodiversity is rich since there are no less than 700 plant species and 200 bird species in the Regional Natural Park of Narbonnaise en Méditerranée.

← Previous Ascros : 5 good reasons to visit this village in the Alpes-Maritimes