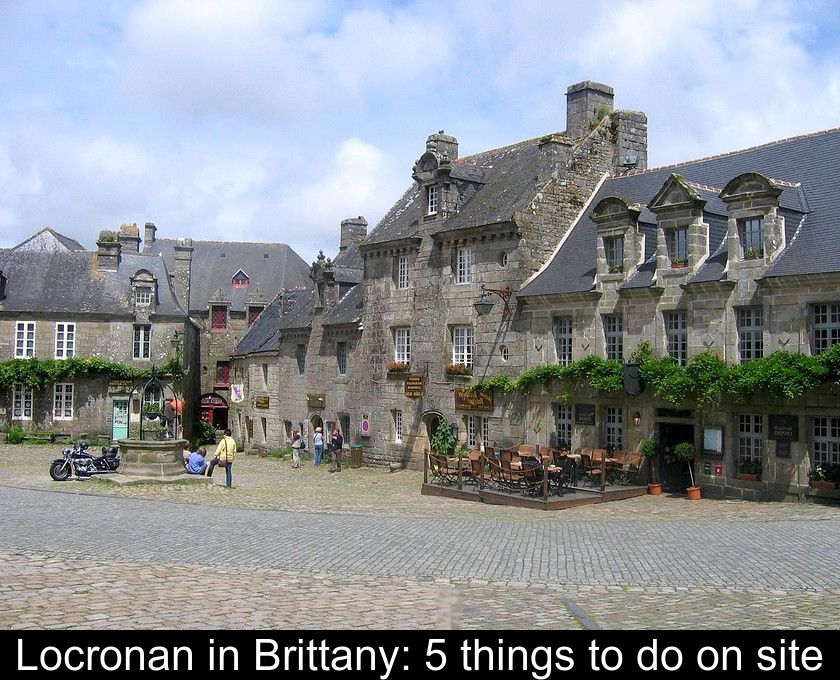 Locronan In Brittany: 5 Things To Do On Site

Locronan, an ancient city of weavers in South Finistère, is a Breton town with a remarkable heritage. Known for hosting the procession of the Grande Troménie since the Middle Ages, this Small City of Character is also a land of inspiration for artists and filmmakers. We have selected for you 5 things to do to discover the different facets of this unmissable tourist destination.

1- Visit the church of Saint-Ronan

Locronan owes its name to Saint-Ronan, the hermit who founded the town in the 10th century. Today, the commune's church is dedicated to this saint.

The church of Saint-Ronan was built in the 15th century by the Dukes of Brittany. This majestic granite building is a jewel of Breton ogival art. You will be able to admire a 1485 master window representing the Passion of Christ.

This church is just one of the architectural treasures that have earned this Finistère commune a place among the Most Beautiful Villages of France.

To complete this visit, don't miss entering the Pénity chapel adjoining the church. There you can see the recumbent statue of Saint-Ronan.

It was from the 14th century that this modest Breton town gained in wealth and beauty thanks to the weaving of sailcloth. This local industry reached its peak in the 16th century.

A city of weavers, Locronan provided prestigious sponsors, including the Compagnie des Indes. This activity allowed the construction of fortunes and magnificent perfectly preserved granite houses.

Be sure to admire the beautiful Renaissance mansions that surround the church square and stroll through the surrounding streets. In order to preserve the historic heart of the city, cars are prohibited there.


3- Immerse yourself in a movie set

The city of Locronan has always been a land of inspiration for artists in general and for filmmakers in particular.

It was in this granite city free of electric cables, antennas and red lights that Roman Polanski shot the film Tess in 1979.

In 1987, Philippe de Broca also put his cameras there for the film Chouans!" with Philippe Noiret, Sophie Marceau, Lambert Wilson and Stephane Freiss.

More recently, Jean-Pierre Jeunet chose this particularly photogenic corner of Brittany for the shooting of the film A Long Engagement Sunday, released in 2004. For the purposes of this film with Audrey Tautou, Gaspard Ulliel, Marion Cotillard, Clovis Cornillac and Jodie Foster, a garden was specially laid out in the gardens of the former presbytery.

If you want to know more about the various film shoots that have taken place in this Little City of Character, we advise you to book a thematic guided tour 'Locronan and the cinema' offered by the Tourist Office.

This ascent is within the reach of most people. The hike to the summit is of moderate difficulty because the height that we call the Mountain of Locronan culminates... at 289 m!

This is nevertheless enough to enjoy a magnificent panorama over the bay of Douarnenez and the Crozon peninsula.

This wooded hill is also home to the Ar Zonj chapel dedicated to Saint-Ronan and a granite rock called the Chair of Saint-Ronan. Both sites are stages of the Grande Troménie, the procession held in the commune every six years.

At the foot of this modest mountain, dunes extend to the Atlantic Ocean and one can see the chapel of Sainte-Anne-la-Palud dedicated to one of the oldest Breton saints.

This Saint Anne venerated in Brittany is nicknamed Mamm gozh ar Vretoned, 'the grandmother of the Bretons'!

Provided you visit Locronan at the right time, you can attend one of the town's most iconic events. In this Breton city, the cult of Saint-Ronan gives rise to an annual troménie, a pardon (a form of pilgrimage) that follows the circuit of his meditations...

But the most anticipated local event is the impressive Grande Troménie which takes place every 6 years in July. The next one is scheduled to take place in 2025.

During this colorful celebration, crowds wearing blue and gold banners and costumes advance in procession along the 12 km of the ancient nemeton. This term refers to a sacred route marked with stations symbolizing the 12 months of the year. Its route predates the arrival of Saint-Ronan in these parts, since it was created in Locronan by the Celts.