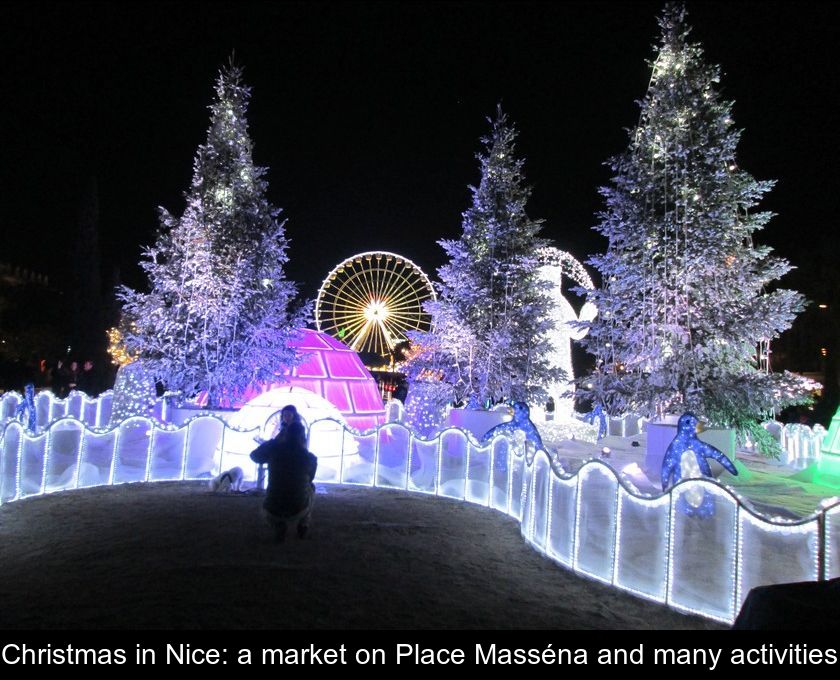 Christmas In Nice: A Market On Place Masséna And Many Activities

Celebrating Christmas in Nice, under the sun of the French Riviera, is a magical experience. From the beginning of December, the Côte d'Azur capital dons its winter coat and is adorned with magnificent illuminations. The inhabitants of Nice and the tourists meet in the heart of the city, on the famous place Masséna to enjoy the animations and the craft products of the Christmas Village.

No need to change hemisphere to spend the end-of-year holidays in the sun... The weather is just as mild on the Côte d'azur where many communes offer a whole program of animations and a Christmas market.

The City of Nice does not escape this avalanche of illuminations and festivities of all kinds. The animations of Christmas in Nice are installed throughout the month of December in the various city districts.

Place Masséna, with its traditional Ferris wheel and village of exhibitors, is the heart of these festivities. But the illuminations are spread all over the city and embellish the streets, with a particular care given to the tramway route.

Even in this period, the city wants to respect the environment and uses illuminations with reduced energy consumption.

This year, the Christmas animations in Nice will take place from December 1, 2022 to January 1, 2023 in the Jardin Albert 1er and on Place Masséna.

Animations, shows and craftsmen's chalets will of course be on hand to help you find gift ideas and satisfy all your gourmet desires.

The traditional Christmas Village brings together about sixty artisan chalets scattered between Place Masséna and Jardin Albert 1er. Many animations are concentrated there: inflatable structures for children, Ferris wheel, merry-go-round in the shape of a giant fir tree, ice rink, without forgetting of course the presence of Santa Claus ...

Note also that other illuminations and animations are planned in the districts of Nice, with no less than 485 illuminated palm trees on the Promenade des Anglais, from Carras to Rauba Capeù, more than 130 km of curtains of light installed on the trees and a large decorated tree in each district of the city.

Each year, the Place Garibaldi benefits from a special lighting and, in 2022, Nice residents and tourists will be able to admire an 8-meter high illuminated tree!

The giant nativity scene Lou Presèpi composed of 17 life-size automatons will be installed on Place Rossetti (every day from December 17 to 25 from 10 am to 8 pm).

The Christmas Village in Nice will take up residence on Place Masséna from December 1, 2022 to January 1, 2023.

← Previous Christmas in Menton: magical animations in the city

Next → Christmas in Provins: a medieval market and many other activities