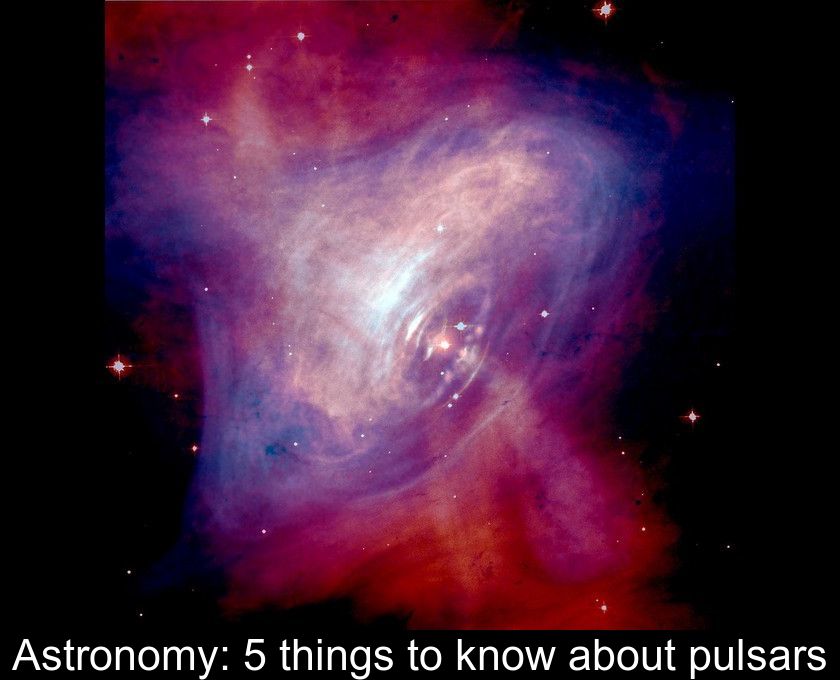 Astronomy: 5 Things To Know About Pulsars

A pulsar is a kind of neutron star that forms when a massive star explodes into a supernova at the end of its life. It is a very singular celestial object, whose discovery was made by chance in 1967. Here are 5 things to know about these amazing 'pulsating stars' or pulsars.

1- A pulsar is a strange star

Among celestial objects, the pulsar is perhaps the strangest form of star.

Pulsars belong to the family of neutron stars, the remnants of the gravitational collapse of a massive star at the end of its life, when it explodes into a supernova.

They are very dense stars that spin on themselves sending out a periodic radio signal.

The interval between two pulses can range from several milliseconds to several seconds.

It is now known that pulsars shine continuously, but that their radiation is emitted from two opposite points of the star.

By rotating very rapidly on itself, a pulsar acts like a lighthouse that sends us its signal at regular intervals.

They are sometimes credited with metronome-like regularity, but scientists have discovered that the regularity of pulsars is not perfect.

It is now known that their rotation speed decreases very slowly over time.

It was British astrophysicist Jocelyn Bell who discovered the first pulsar while a thesis student in 1967.

While examining records from a radio telescope originally intended to detect interstellar scintillation, she noticed a signal appearing regularly every 1.3373 seconds.

At the time, this strange signal was different from all known radio astronomical signals.

In fact, the scientists who detected it first nicknamed it Little Green Man because they didn't know how to interpret such a regular signal from space.

The theory of an extraterrestrial signal was soon abandoned. It was in fact a pulsar located in the constellation Little Fox about 2000 light years from Earth.


4- This discovery was rewarded with a controversial Nobel Prize

While Jocelyn Bell is known today for discovering the first pulsar, it was her thesis advisor Antony Hewish who won the Nobel Prize in 1974.

This injustice triggered a very heated controversy within the scientific community.

After this episode, however, the British astrophysicist Jocelyn Bell has been repeatedly honored and awarded for her work and for her entire career.

She is a doctor honoris causa from a dozen universities, the most prestigious of which is undoubtedly Harvard University in the United States.

She also received the Yuri Milner Foundation Fundamental Physics Prize and donated the $3 million award to the Oxford University Institute of Physics to create a scholarship in her name and help underrepresented categories of students in physics.


5- There are hundreds of them, each with its own rhythm

Today, many researchers are still working on pulsars. To date, about 2000 have been counted.

In the video below, the Russian space agency Roscosmos has transposed the electromagnetic pulses of several pulsars into sound waves so that we can hear them.

Here's what this amazing singing of the stars sounds like (the ancient Greeks would have called it the music of the spheres!):

Next → Astronomy: the Gaia satellite revolutionizes our vision of the Milky Way