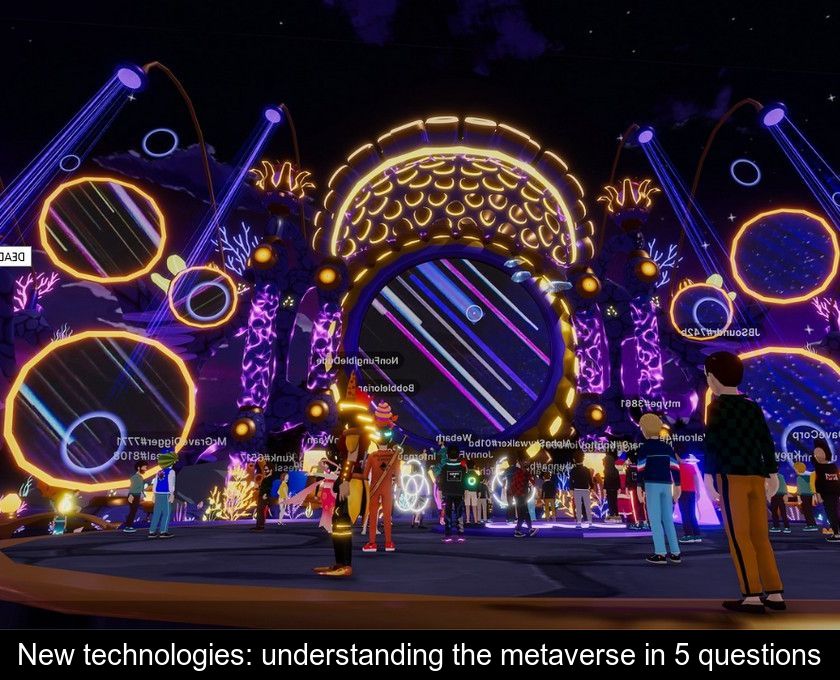 Since Mark Zuckerberg decided to rename his company Meta, the word 'metaverse' has been heard everywhere. But do you know what it is exactly? We suggest you discover what the metaverse is in 5 questions.

The term meta refers to an immersive virtual world. This word is composed of two roots: meta which means 'beyond' in Greek and verse which means 'the world, the universe'.

Although it is virtual and located 'beyond' reality, this parallel universe remains connected to the real world.

Moreover, by connecting to this virtual space, it is possible to interact with other 'real' people (who exist in real life, like you and me).

This parallel world has the following three characteristics:
- immersion in a virtual reality
- the possibility of joining or leaving this world at any time through an avatar
- the fact that the elements that make up this world are durable or permanent.

To be noted: thanks to NFTs Internet users will be able to acquire unique elements such as works of art to be displayed in their personal space or accessories to personalize their avatar.

Contrary to what one might think, the concept of metavers is not so new.

It was first described in the 1968 novel Simulacron 3 by Daniel Galouye.

However, it was not until 1992 that the term metaverse appeared in Neal Stephenson's The Virtual Samurai.

The concept gained traction in Silicon Valley in the late 2010-2020s. Today, major companies like Facebook and Microsoft are investing staggering amounts of money in the technology.

A Bloomberg Intelligence report estimates that the metaverse market could be worth $2500 billion by 2030.


3- Why such a renewed interest?

For several months now, Silicon Valley giants have been interested in metaverses or parallel digital worlds.

On October 28, 2021, Mark Zuckerberg made an announcement that made a lot of noise: the change of name of his company!

Not only did the boss of the former Facebook group decide to rebrand his company Meta, but he also announced the creation of 10,000 jobs in Europe with a view to developing a virtual world 'where we will play and connect in 3D'.

To quote Mark Zuckerberg's description of it: 'You'll be able to do almost anything you can imagine: get together with friends and family, work, learn, play, shop, create.'

The activities possible within the metavers are much more extensive than in a simple massively multiplayer video game.

This virtual universe could even offer many professional opportunities, especially for architects, decorators, fashion designers, Nft creators and game or app creators.

For anyone wondering about how this metaverse actually works, know that you need a virtual reality headset to access this universe and have multiple 3D experiences in it.

A bit like in a video game, you are represented by an avatar that looks like you (or not!) and that moves in this virtual world.

But above all, thanks to your virtual reality headset you can live immersive experiences there without leaving your home!


5- What is the interest of this parallel world?

You may wonder what the point of connecting to this parallel and virtual world is...

The whole point of the metaverse lies in the possibility to live unique experiences, in an immersive way and without leaving your home.

It can be, for example, attending a concert, interacting with other Internet users, participating in a meeting or visiting places.

In late 2021, the city of Seoul announced that it wanted to become the first major city in the world to enter the metaverse.

Thus, it would become possible to attend the Seoul Lantern Festival anywhere in the world, thanks to a simple virtual reality headset!

The metaverse is perhaps the future of the Internet or at least a natural evolution of social networks with the same vocation of bringing people together in a virtual space. Welcome to a new dimension!

Next → Video games, music, VOD: the legal guarantee of conformity is extended to digital content