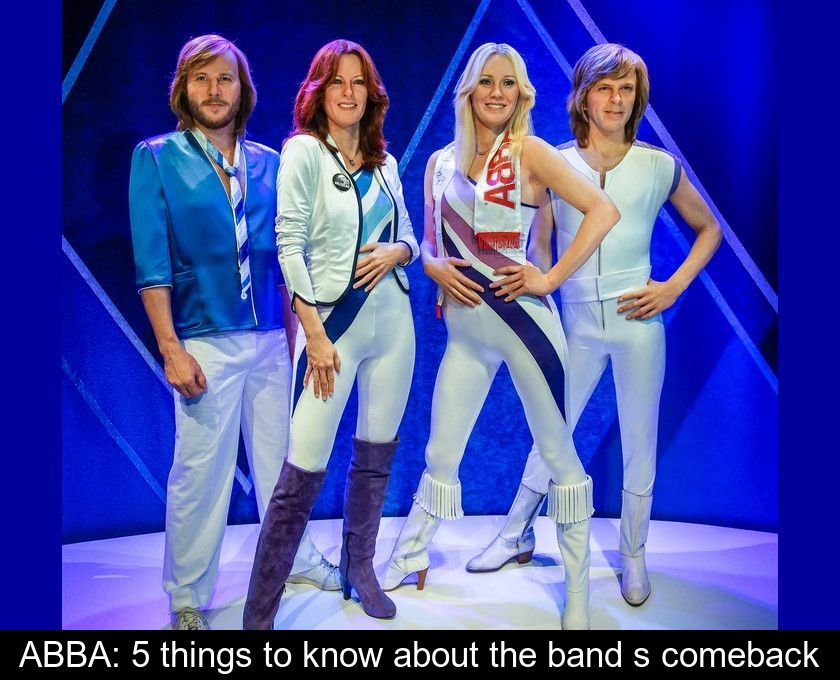 Abba: 5 Things To Know About The Band's Comeback

Fans of ABBA didn't believe in it anymore, but the Swedish pop group has reformed 40 years after their last studio album and has just released a brand new album. Fans will even be able to catch the world's four most famous Swedish pop stars on stage in 2022. Here are 5 things you need to know about the comeback of this legendary band.

1- Abba makes his comeback after 40 years of silence

After several unfulfilled announcements made since April 2018, the band ABBA has officially announced its return on September 2, 2021.

Of course, the pop music legends' hits have never left the airwaves, as Mamma Mia, Dancing Queen and Waterloo can still be heard on the radio ...

But this announcement created a stir because it was accompanied by the release of unreleased tracks.

It's been four decades since fans have been able to discover unreleased hits from their idols. So it's easy to see why this news has sent ABBA fans into a tizzy.

Fans were excited because they found 'the Abba sound' in these tracks! Admittedly, the vocals are a little bit different because they are true to the age of the performers today.


3- An unreleased album was released on November 5th

These two songs were just a taste of ABBA's big comeback, as the band announced a previously unreleased album for November 5, 2021.

The album, titled Voyage, features 10 tracks and is composed entirely of original songs. It is the unplanned result of a project the band has been working on for years: a digital avatar concert.

Although it divided the critics, the new record made fans happy because it played the nostalgia card to the hilt. The band didn't change their sounds to fit the times, nor did they distort their vocals.

On the contrary, it has remained faithful to the sounds and arrangements of heady 70s hits such as Waterloo (which helped Sweden win Eurovision in 1974).

The record, which is the band's ninth studio album, will indeed be their last, the two 'Bs' confirmed, in an interview with The Guardian in late October.

ABBA's big comeback also came with the announcement of a London show in 2022.

The band members, considering themselves too old (as they are between 71 and 76 years old today) will not take the stage in the flesh. They will be replaced by revolutionary avatars who represent them in their glory days... in 1979!

This show was designed by Industrial Light & Magic, the special effects company founded by George Lucas, the father of the Star Wars saga! It would have required a team of 850 people.

Although they won't be on stage, it's the members of today's band who will be heard singing and they're the ones who will have commanded the movements of their avatar.

A 3,000-seat venue is to be built in London to house the digital avatars of the world's most famous Swedish pop group.

The choice of the city is not surprising as the UK is the band's main market in Europe.

If you don't want to miss this concert event, be aware that the show will be held beginning May 27, 2022 and performances are scheduled until December 4, 2022.

Booking conditions and prices can be found on the abbavoyage.com website (see link below).

← Previous 2021, the polar summer: a cultural season throughout France

Next → Cartier and the Arts of Islam: a dazzling exhibition at the Musée des Arts Décoratifs in Paris