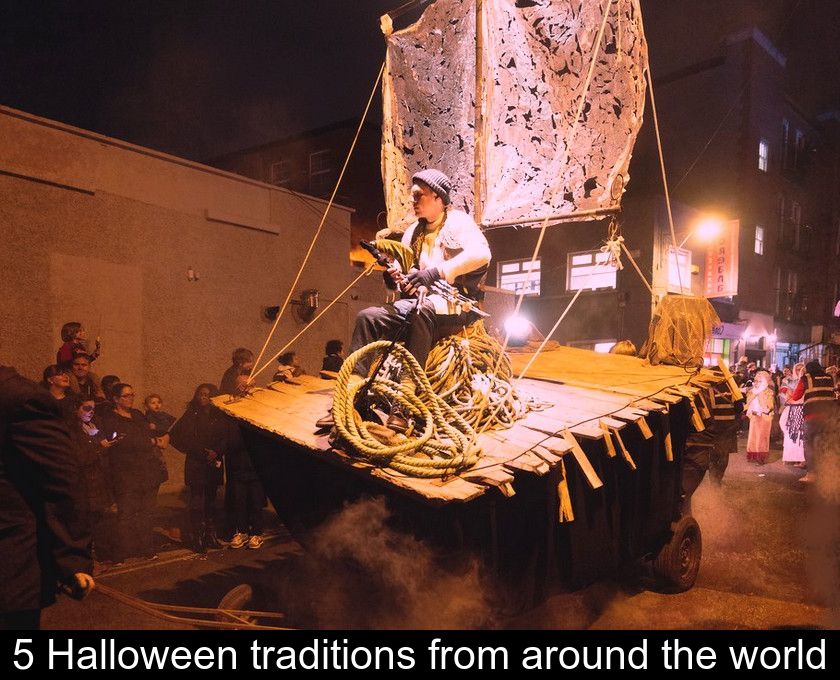 5 Halloween Traditions From Around The World

The festival of Halloween has its origins in a long Celtic tradition. It derives from a pagan festival called Samhain that celebrated the end of the harvest and the transition from summer to winter. Today, this holiday is still celebrated around the world between October 31 and November 2, but the traditions are not exactly the same depending on the country or region. We propose you to discover 5 traditions of Halloween in the world.

1- A big parade in Dublin, Ireland

In Ireland, October 31 is celebrated not only in homes but also on the streets. Throughout the country, street parties, bonfires and fireworks are held on this occasion.

The capital city of Dublin even features a large parade each year called the Samhain Halloween Parade. This is the largest free Halloween event in Ireland!

This colorful tradition has witches, zombies, fantastical animals and other bizarre creatures parading through the city.

2- A zombie walk in London

In the English capital, it is another kind of parade that is part of the traditions of Halloween.

To celebrate October 31 in London, UK in a dignified way, you should indeed take part in the Zombie Walk or Zombie Walk! Dress up and put on makeup accordingly before taking to the streets!

This funny ritual perhaps inspired by the success of the TV series The Walking Dead has actually spread to other major cities around the world, including Lyon, Paris and Bordeaux in France...

3- Gifts for children in Sicily

In France, Halloween celebrations are very much inspired by North American traditions. One of them is for children dressed up to go trick-or-treating and knock on doors to ask for treats by uttering the phrase 'Trick or treat!'.

But in Sicily, the customs are a little different because children receive gifts like at Christmas. The main difference is that the gifts are supposed to be given by the dead and not by Santa Claus!

It is an ancient Sicilian belief that on the night of November 1st to 2nd, the souls of the dead visit family members and bring gifts for the children. These are usually games, toys and sweets.

These gifts are well hidden around the house, and on the morning of November 2, the children participate in a real treasure hunt to unearth them, while perpetuating the memory of departed loved ones. The day continues in a more conventional way with a visit to the cemetery.

4- A very joyful celebration of the dead in Mexico

In Mexico too, we do not celebrate Halloween but the Day of the Dead (el Dia de los Muertos), on November 1st and 2nd, following the traditions that the Disney and Pixar Studios cartoon Coco has made known all over the world.

For two days, Mexicans honor the dead in a surprisingly joyful atmosphere. It must be said that on these two days, they consider that the deceased come to visit their family and friends.

So they go to the Cemetery to bring offerings to the graves: candles, flowers, food as well as the famous calaveras which are skulls ... made of sugar!

On the other side of the world, in Tahiti and French Polynesia, the cult of the dead or Turamara'a also has less sad sides than All Saints' Day and Day of the Dead in mainland France.

Like the Europeans, the Polynesians put flowers in the cemeteries. But on the evening of November 1, they also light the graves with candles and sing religious songs to pay tribute to the deceased.

In the days leading up to it, families visit the cemeteries to maintain the graves and cover them with white sand. On the evening of All Saints' Day, the illuminations and singing create a more joyful and peaceful atmosphere than at home.

In Europe, the party is more in full swing on the night of October 31 with Halloween costumes and candy hunts. This is also the time to prepare pumpkin-based specialties such as the famous American pumpkin pie!

← Previous 5 good reasons to go to London in autumn

Next → 5 things to do in Saintes-Maries-de-la-Mer