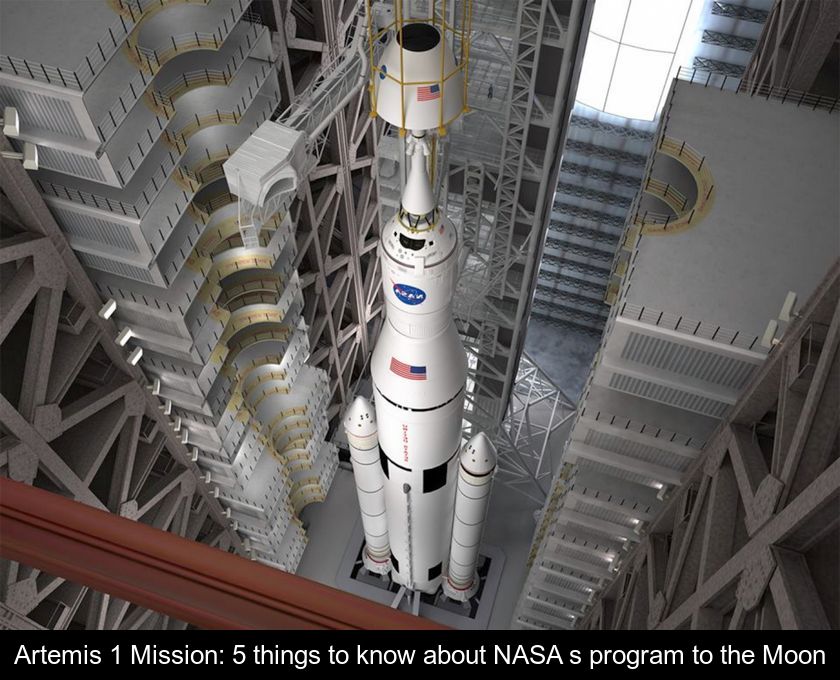 Artemis 1 Mission: 5 Things To Know About Nasa's Program To The Moon

Today, Monday, August 29, 2022, a new page in space exploration opens with the Artemis 1 mission. Here are 5 things to know about this space program that should allow NASA to send astronauts back to the Moon fifty years after the last Apollo mission.

1- The rocket launched today has no astronauts on board

This Monday, August 29, 2022, the SLS rocket is scheduled to launch from Kennedy Space Center in Florida for its first test flight. With the launch of this giant next-generation rocket, NASA is also launching its Artemis Program to send astronauts back to the moon.

The SLS (for Space Launch System) rocket will propel an unmanned capsule called Orion around the Moon for a 6-week test flight.

The rocket is scheduled for liftoff today beginning at 2:33 p.m. and the launch window will remain open until 4:33 p.m.

The first crewed Artemis mission is scheduled for 2024.

If the first two Artemis missions are successful, NASA plans to send astronauts (and for the first time a woman) to the surface of the Moon as early as 2025.

The launch of the rocket and the Artemis program today is already creating an event because :
- it has been 50 years since astronauts returned to the Moon. The last time astronauts went to the moon was in 1972, as part of the Apollo 17 mission.
- the SLS rocket is described as the most powerful and complex rocket in the world. It is the most massive launch system ever built by NASA since the Saturn V rocket developed for the Apollo program.

If you want to watch its launch without having tickets to the Cape Canaveral launch pad, you should know that the event will be streamed live on many online channels, including NASA's Youtube channel (in English) starting at 12:30 p.m. EST :

In France, CNES, the National Center for Space Studies, will comment on the event on Twitch starting at 2pm.


3- Thomas Pesquet is one of the candidates for this program

The Artemis 1 mission that opens today is part of a NASA program. But the astronauts who will have the chance to return to the Moon soon will not necessarily all be Americans.

French astronaut Thomas Pesquet is among the serious candidates to participate in this new lunar program.

Thomas Pesquet spoke about his chances of going to the Moon in the coming years, considering them 'not negligible'.

One of the goals of the Artemis program is to establish a long-term base on the Moon.

Not only will astronauts walk on the Moon again, but they will also settle there to live and conduct research, much like the International Space Station!

This program should lead to the sustainable exploration of the Moon and the installation of a permanent post on its surface.

It should also allow testing and development of equipment and procedures that can be used on future crewed missions to the surface of Mars.

The Artemis program, which begins today, has the long-term goal of enabling travel from the Moon to Mars. But that's an assumption NASA is considering for the long term, after 2030.

Many experts, however, believe that the projected schedule is likely to fall behind. The first manned missions could be pushed back several years...

In the meantime, it will be possible to follow the Orion capsule continuously during the 42 days of its mission around the Moon until its return to Earth scheduled for October 10, 2022 on the Arow website: https://www.nasa.gov/feature/track-nasa-s-artemis-i-mission-in-real-time

Next → Christmas gifts: why and how to give second-hand gifts?