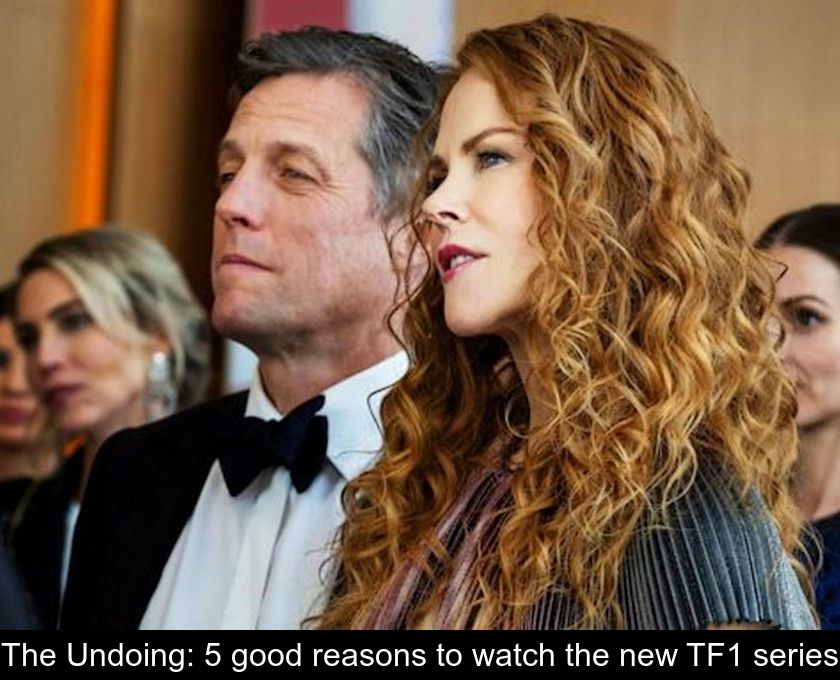 The Undoing: 5 Good Reasons To Watch The New Tf1 Series

From Wednesday 5 January, TF1 will broadcast the series The Undoing. Carried by a 5-star cast, this drama with a poisonous atmosphere is one of the most awaited news of this beginning of the year 2022. We have listed for you 5 good reasons to watch this series.

1- For its renowned screenwriter

A 6-episode miniseries, The Undoing is David Edward Kelley's adaptation of the novel First Impressions by Jean Hanff Korelitz.

If you think this psychological thriller sounds a lot like the series Big Little Lies with the same actress Nicole Kidman, the same initial murder and the same well-hidden secrets that are revealed over the course of the episodes, you're right!

Indeed, both series have the same writer, David Edward Kelley, who is also the creator of the series Ally McBeal and Boston Justice and who once again deploys all his talents as a screenwriter.


2- For its breathtaking suspense

In New York City, Grace and Jonathan Fraser lead a seemingly uneventful life with their son Henry. She is a psychotherapist specializing in relationships and he is a child oncologist.

These middle-class characters seem to be an ideal couple, until a young woman is murdered and Jonathan mysteriously disappears.

He is then suspected to have killed this young woman who was his mistress. If he was able to hide this infidelity, could this loving family man and husband have covered up a murder? That is the question that plagues his wife and viewers throughout the six episodes.

Throughout this breathless thriller, the viewer's opinion keeps balancing between the guilt and innocence of this suspect brilliantly played by Hugh Grant.

In short, The Undoing is a whodunit (who did it?) that the master of the genre Agatha Christie would have hailed for its audacity.


3- For its high-flying cast

In this mini-series, the very well written characters are at the service of a particularly Machiavellian plot.

The Undoing is carried by great actors, starting with the main Couple and the brilliant Donald Sutherland as Grace's father.

The casting is brilliant as Nicole Kidman displays incredible dramatic power throughout the series and her character's descent into hell.

Hidden under long coats and underneath her flamboyant hair, the actress chillingly conveys the pain of this woman whose life is shattered and who wanders the streets at night.


For his part, Hugh Grant is an equally good choice to play this character who you never know if he's the devil himself or an innocent victim...

About the ambiguity of his character, the actor actually said, 'I'm often mistaken for a fake good guy, so this role was made for me!'

For this role, Hugh Grant did not hesitate to break his image of romantic hero and shoot scenes of a sensuality unseen from him in the cinema.


4- For its magnificent realization

In The Undoing, her sense of framing and precision combine with superb photography to give us some very beautiful images.

Unlike many other TV series, this fiction does not give a completely overused vision of New York: the choice of neighborhoods, parks and alleys allows rediscovering this city filmed with authenticity.

After Big Little Lies, David Edward Kelley takes us from the blue of the Californian sky to the colours of autumn in New York for our great pleasure.


5- For its surprising finale

With The Undoing, TF1 offers a series with a refined plot and perfectly controlled suspense.

This harrowing thriller, which benefits from magnificent direction and top-notch acting, succeeds in raising the tension right up to the last episode.

Prepare to be surprised: this mini-series keeps some mystery and reserves a shocking finale. Even its title is mysterious (undoing means 'to undo' in French) and we only understand its meaning as the episodes progress...

About his character and the mystery surrounding him, Hugh Grant explains, 'Nothing in life is ever all black and white. The strength of The Undoing is that it plays with all shades of grey. Innocent, guilty, complicit? We don't know anything about this doctor until the denouement of this murder story.'

← Previous The series Vortex on France 2 in 5 questions

Next → Times are changing: what is Faustine Bollaert's show on France 2 worth?