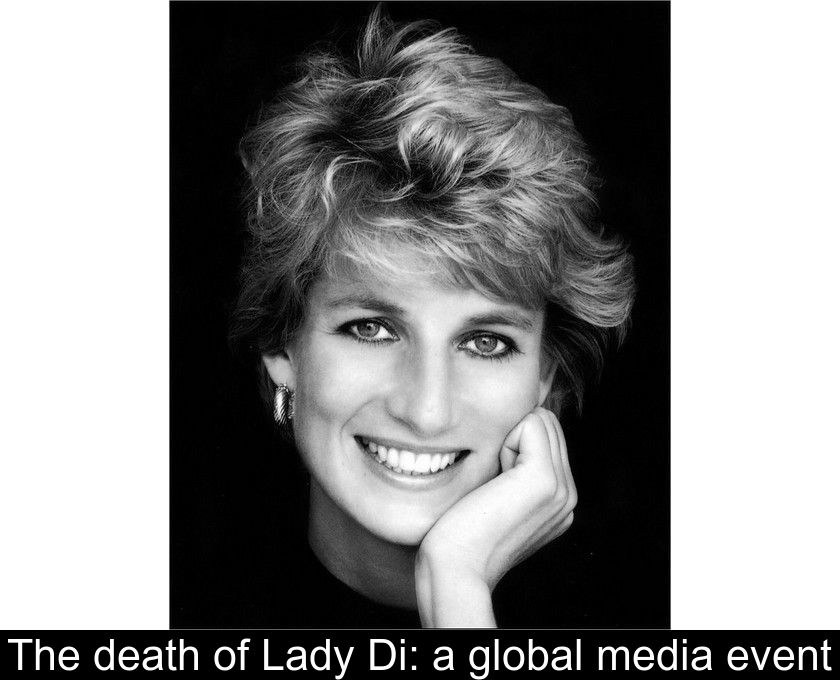 The Death Of Lady Di: A Global Media Event

On Sunday, August 31, 1997, 25 years ago to the day, Princess Diana was killed in a car accident in Paris. This tragedy made a lot of noise in the media at the time. Twenty-five years later, many documentaries pay tribute to the Princess of Hearts on television and in the cinema.

Diana Spencer, aka Lady Di, was a global icon. Even during her lifetime, Princess Diana's popularity made her a favorite target of the paparazzi and the tabloids.

Her every move was scrutinized and commented by the media. A few weeks before her death, on July 10, 1997, the press had revealed the romance between Diana and Dodi Al-Fayed.

The day the princess met her tragic end, Twitter did not exist and news channels were in their infancy. On the morning of August 31, 1997, around 6:00 am, the French learned from TV and radio that the Princess of Wales had died at the age of 36 in a car accident in Paris under the Alma bridge.

This unthinkable disappearance causes a media blast across the globe and particularly in France where the event occurred. Behind the scenes, the news of the accident that occurred at 12:30 a.m. has already been circulating for several hours...

The journalist Bruce Toussaint, who happened to be present at the scene of the tragedy, even went on air live on Canal+ around 2:30 am to reveal the information. He will resume the air around 6 am, once the death of the princess officially confirmed.


An unprecedented device on TF1

Warned in the middle of the night, TF1 news director Robert Namias decided very early on to go on special edition, even though very little was known and there were no witnesses to the accident.

As this drama occurred on a weekend, the usual presenter, Claire Chazal, was unreachable. It was Robert Namias himself, a radio man experienced in live broadcasting, who appeared on television to announce the news and who went on 6 hours of non-stop air until Claire Chazal arrived.

That day, for the first time, the channel TF1 shook up its program schedule and broadcast continuous news. Today, all the channels do this whenever there is a large-scale event. But there, four years before September 11, 2001, this type of media coverage was completely unprecedented.

Also on TF1, a young commentator with a passion for the royal family was making multiple appearances. That day, the channel chartered a helicopter to repatriate Stéphane Bern, a young specialist in crowned heads who was in the countryside. Stéphane Bern then won his ticket to fame.


Multiple tributes on the small and big screen

Twenty-five years later, the media have not forgotten the Princess of Hearts who disappeared too soon, only one year after her divorce from Prince Charles.

Forbidden zone broadcasted no less than 3 documentaries on Princess Diana during a special program on Tuesday, August 23 at 9:10 pm. The channel C8 also traced the journey of Lady Di from her childhood to her last days in the documentary Diana, histoire d'une princesse.

Stéphane Bern devoted an issue of Secrets d'histoire to her, broadcast on Monday, August 29 at 9:10 pm. He looked at the reasons that led Diana to agree to marry Prince Charles. This program paints the portrait of a young woman fed on romance novels dreaming of meeting Prince Charming.

TMC rebroadcast Diana, l'envers de la couronne and RMC Story offered in prime time on Friday, August 26 Lady Di : enquête sur un destin tragique. This documentary looks back at the accident and the conspiracy theories surrounding it. The circumstances of the Alma tunnel accident have indeed inspired a number of more or less far-fetched theories incriminating the royal family, such as a hidden pregnancy, an attack or the sabotage of the car.

A thousand rumors circulated and were shamelessly relayed by the English tabloid press. However, the two official investigations, one French and the other British, came to the same conclusion: that of a banal car accident favored by the excessive speed and the state of drunkenness of the driver of the Mercedes, Henri Paul.

In addition, a documentary directed by Ed Perkins and entitled The Princess is being released in theaters today. It is composed exclusively of archival footage, some of which has never been seen before, and required an enormous amount of documentation and editing.


Finally, don't miss on Monday, September 5 at 9pm on France 5 the broadcast of Diana, the seven days after her death, a documentary that gives the floor to Princes William and Harry on the seven days that separated the accident from Lady Di's funeral.

Next → The great saga of the Tour de France: relive the emotion of the Grande Boucle on France 2