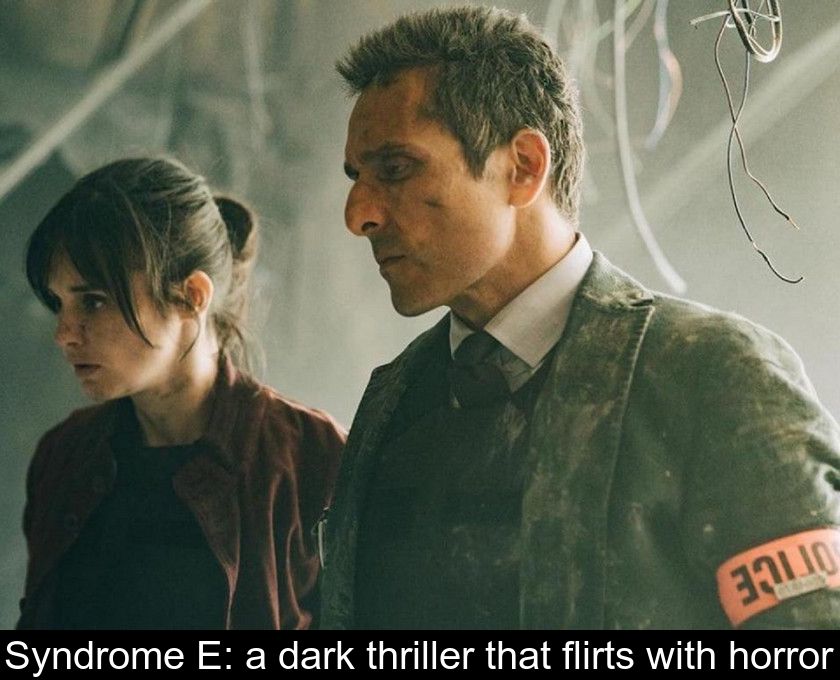 Syndrome E: A Dark Thriller That Flirts With Horror

With the series Syndrome E, to be discovered from Thursday, September 29, TF1 dares the black thriller and flirts with horror. And the result is worth watching! We have listed for you 5 good reasons to discover this new, dark and addictive series.

1- For its confusing and fascinating history

With Syndrome E, the TF1 channel takes the bold gamble of a thriller bordering on horror. This new fiction has nothing to do with the usual police series of the One. Far from being content with telling an investigation, it offers a horrific thriller, captivating and tinged with the supernatural.

Commissioner Franck Sharko of the 36 Quai des Orfèvres has been living on the edge since he lost his wife and daughter. Just as he seems to be on the verge of losing his footing, the disappearance of children and an act of violence become his new obsession.

Lucie Henebelle, a cop on the BAC, has shot her teammate point-blank for no reason after seeing a black-and-white video filmed on a Super 8 camera and crying tears of blood.

This is the starting point of a confusing but addictive investigation that will keep you on the edge of your seat for three weeks, over the course of six 52-minute episodes, and take you on a journey from France to Canada to Morocco.


2- For its play with the codes of horror films

Syndrome E's main originality is to play with horror movie codes such as tears of blood, mutilated corpses and scars both literally and figuratively!

Despite its darkness, this crime series carries a real tenderness to its dented characters, which brings light in so much darkness.

In addition to the main duo of Jennifer Decker and Vincent Elbaz, Kool Shen, Emmanuelle Béart, Michèle Bernier and Anne Charrier are among the cast members of this very successful adaptation.


3- For the aesthetics of Franck Thilliez

An adaptation of Franck Thilliez's novel of the same name, the Syndrome E series bears the author's signature.

Fans of the writer will easily recognize the aesthetics of his thrillers in the bluish light, the clinical setting and the dizzying shots.

All of these elements contribute to creating an atmosphere of (very) dark fiction never before seen on TF1.

From the very first scenes, the series establishes a climate of unease and a disturbing atmosphere. Fans of horror films will love having goose bumps in front of their small screen!


4- For its reflection on violence

Franck Thilliez's novel and its TV adaptation on TF1 owe their title to a personality disorder.

Syndrome E, theorized by American neurosurgeon Itzhak Fried, is a hyperactivity of the orbitofrontal cortex that turns ordinary people into torturers and executioners of helpless victims.

Although this syndrome is not officially recognized, it is the subject of research. Above all, it allows Franck Thilliez to plunge us into the world of neuroscience and to lead a subtle reflection on the origin of violence.

The sources of violence and resilience, two themes dear to this author, are at the heart of this fiction.


5- For the performance of the actors

This dark series with a dizzying script is carried by two talented performers, Jennifer Decker and Vincent Elbaz.

More accustomed to the roles of seducer, Vincent Elbaz is unrecognizable in the skin of Commissioner Franck Sharko. With gray hair, an emaciated face and a heavy gait, the actor composes a disillusioned and depressed hero, at the limits of madness.

For her part, Jennifer Decker boarder of the Comédie Française is the revelation of this series. She plays with undeniable grace a cop who is both fragile and tough.

This formidable duo takes us along on a quest for truth where death is never far away. So are you ready to dive into the abyss of the human brain with Syndrome E?

This new series is to discover from Thursday, September 29 at 9:10 pm on TF1.

← Previous Superman and Lois on TF1: the good surprise of the summer