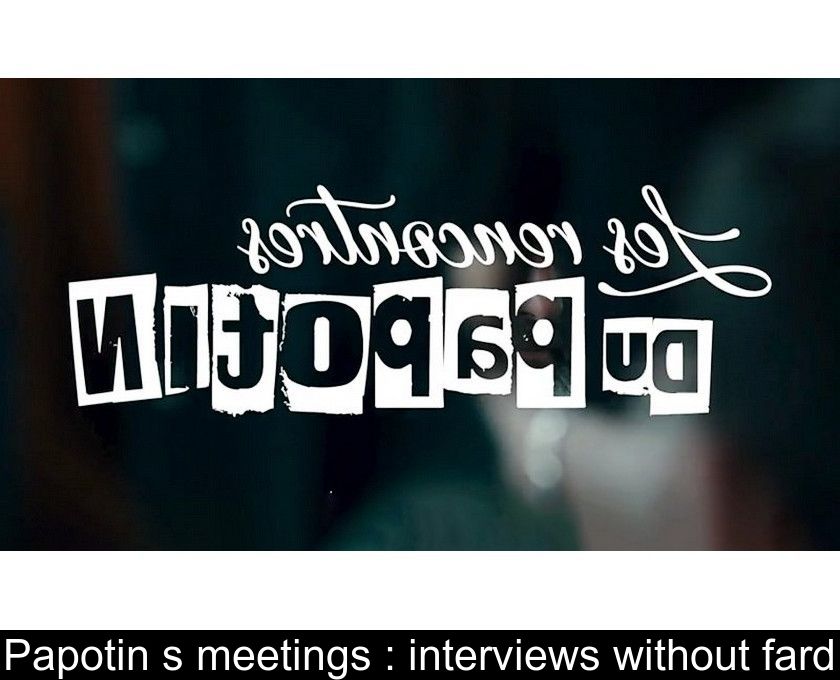 Since September 3, 2022, France 2 has been broadcasting Les rencontres du Papotin. In this original magazine, personalities are interviewed by atypical journalists with autism spectrum disorders. In this context where spontaneity is the key word, the guests reveal themselves as never before.

Perhaps you've already heard of The Papotin newspaper, which is staffed by lonely journalists with autism spectrum disorders.

This newspaper was created about thirty years ago within the day hospital in Antony. It is produced by about 50 patient-reporters who meet weekly for a Wednesday morning editorial conference.

Since September 3, 2022, France 2 has been broadcasting interviews after its JT that take up the principle of this newspaper: Les rencontres du Papotin. Various personalities are invited to answer questions prepared by autistic reporters who have looked into their background.

This meeting takes place in front of the cameras of Éric Tolédano and Olivier Nakache. During the filming, everything is done so that interactions occur freely between the journalists and the guest. The light is natural, the cameras are assumed and the interview takes place in complete transparency.

The meeting is simply framed by Julien Bancilhon who is a psychologist and editor of Papotin. But the word is free and the interviewers of the day can share texts or songs they have written.


Interviews with a straight face

Faced with these journalists like no other, the interviewees know that anything can happen but also that they have the right to tell the Papotin reporters everything...

If you find TV interviews very standardized, usually promotional and composed of predictable questions, you will love the originality, spontaneity and sincerity of the questions asked in Les rencontres du Papotin!

During this singular, unfiltered, and star-hosted event, the questions are unexpected and so are the answers. The sincerity of the question calls for an equally authentic answer.

During the first issue, one of the journalists thus declared to a hilarious Gilles Lellouche: 'I prefer Jean Dujardin'!

To inaugurate Les rencontres du Papotin, it is the actor, director and screenwriter Gilles Lellouche who lent himself to the game of the truthful interview.

Rather comfortable with questions that could disarm, he revealed quite a bit of personal information such as 'I get around on an electric scooter because I no longer have a license'. He also confessed to having made a tattoo following a lost bet and to have recourse to an understudy for the nude scenes in his films.

As in a classic interview, he also talked about his work and his tastes, revealing in passing his love for cassoulet and traditional French dishes.

So if you want to discover Gilles Lellouche as you've never seen him before, you can find this first issue of Rencontres du Papotin in replay on france.tv (see the link below).

Eight 30-minute programs have already been recorded and will be broadcast on France 2 during the season. You will be able to discover personalities in a new light, in a context where there is no promotion to do or scoop to look for.

If the spontaneity of these autistic reporters touches you, you just have to watch for the return of this original appointment on Saturday nights at 8:30 pm on France 2!

← Previous Out of season: a chilling thriller with Marina Hands on France 3

Next → Plus belle la vie: soon the end?