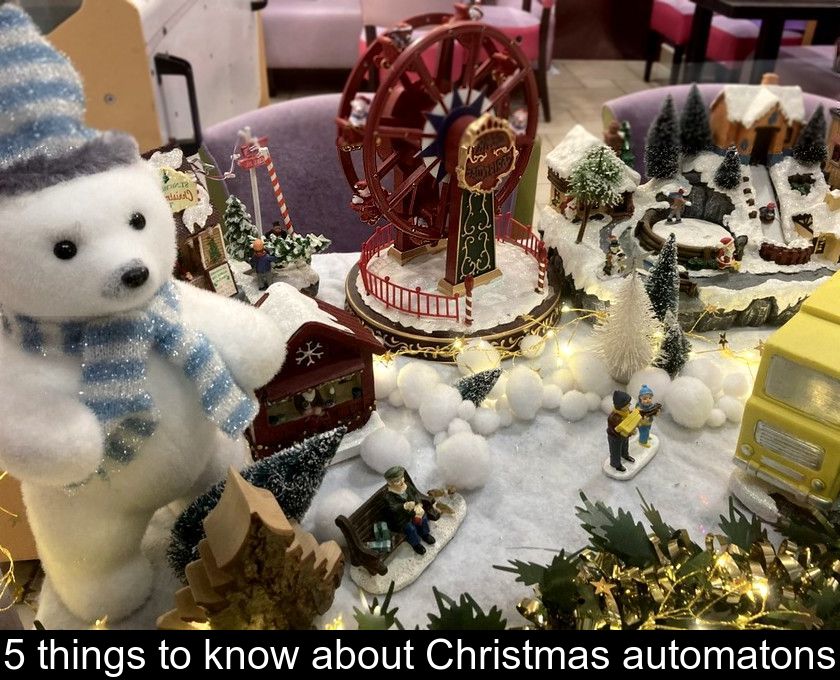 5 Things To Know About Christmas Automatons

During the holiday season, animated characters are the undisputed stars in the windows of department stores. But do you know how and since when Christmas automatons are made? If you don't know their history and origins, here are 5 things to know about these amazing characters.

1- Automata are on the rise

Have you noticed that automatons have made a comeback in shop windows during the Christmas period to decorate stores and catch the attention of passers-by?

After having known a golden age between 1850 and 1914, these advertising objects had fallen into disuse.

But, for a few years now, they have been making a comeback in shop windows, especially during the end-of-year celebrations.

The Big Parisian stores such as Galeries Lafayette, Le Printemps Haussmann and Le Bon Marché compete with inventiveness and poetry to attract the eyes and make customers come in front of their windows.

Le Bon Marché devotes 30% of its annual image budget to this. Christmas automatons have been a tradition at Le Bon Marché for over a century.


2- They are made in France

Unlike other Christmas decorations and garlands made in China, the automatons that can be admired in the windows are mostly made in France!

For nearly 30 years, the Michel Taillis - The Animate Factory workshop has been handcrafting and customizing animated characters for retailers.

This company, located in Seine-Maritime, is one of the few in France to master this know-how.

With Christmas approaching, this Norman company has many orders to fulfil.

In this growing market, The Animate Factory exports 50% of its Christmas automata.


4- It's an old but still flourishing tradition

Even though vending machines are now seducing department stores around the world, it's important to note that this is not a new trend.

It was in 1909 that the Bon Marché launched the fashion of animated shop windows in Paris.

This department store was soon imitated by other retailers in the capital, starting with Galeries Lafayette and Le Printemps.

Since then, the Boulevard Haussmann in Paris has become the go-to place for Christmas automaton lovers.

The many animated shop windows that can be seen there have made generations of little Parisians dream.

This year also marks the return of the Christmas windows at the Samaritaine as the famous department store in central Paris has reopened its doors in 2021.


5- Automata have their own museum in Souillac

And then, you may ask, what happens to the automatons that amaze us for a few weeks during the end-of-year celebrations?

Contrary to what one might fear, Christmas automatons do not necessarily end up in the trash!

A museum, located in Souillac in the Lot, presents more than 300 automatons and mechanical toys from the 19th and 20th centuries.

If you feel like prolonging the magic of Christmas all the rest of the year, don't miss out on the Souillac automaton museum!

There you can admire the most beautiful scenes that animated the windows of Parisian department stores like Galeries Lafayette in the 1950s or earlier.

Some 100 year old automatons are still working wonderfully thanks to the care taken by the museum staff.

'We have to pamper them, check the mechanism regularly [...] so that future generations can enjoy them.', explains Sophie Lefebvre, the museum manager.

This collection of more than 300 automatons and mechanical toys is unique in Europe (see the site: https://www.sarlat-tourisme.com/offres/musee-de-lautomate-souillac-fr-1965038/).

← Previous Winter vacations : what to do in Val Thorens ?

Next → Acapulco armchair: 5 good reasons to follow this decorating trend