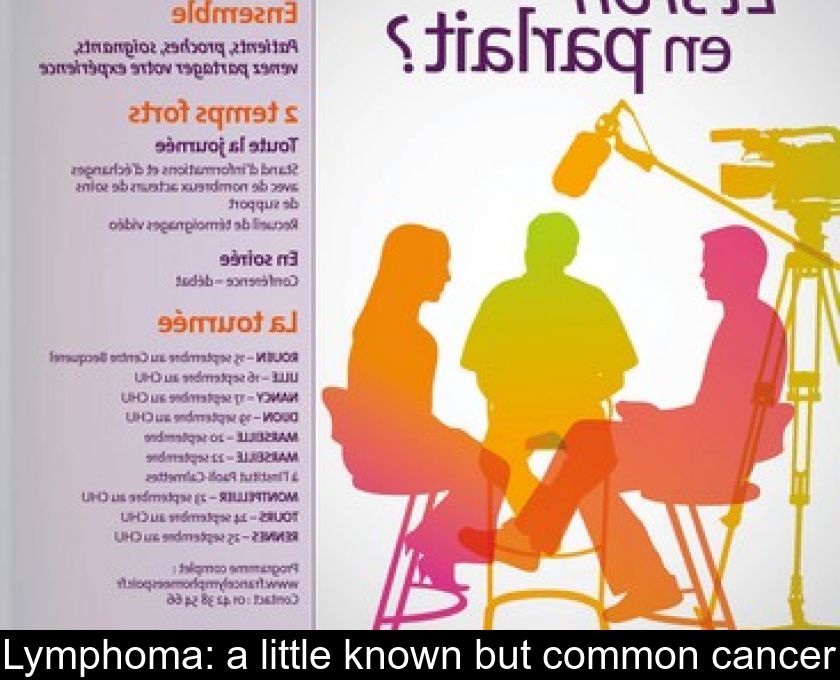 The World Lymphoma Day, on September 15, is an opportunity to remember that this cancer, which is little known to the general public, affects 200,000 people in France. It is even the 5th most common cancer, with 14,000 new cases per year in France. Here is the essential to know about this cancer of the lymphatic system.

lymphoma is a cancer of the lymphatic system, an essential part of our immune system. It does not affect a single organ but can develop in the entire system.

Its causes are not well known, but certain chemicals and environmental factors may promote the development of lymphoma.

This cancer is difficult to diagnose because its symptoms resemble those of other common, benign diseases:
- swollen lymph nodes
- flu-like symptoms
- itching
- fatigue

There are over 60 types of lymphoma, varying in severity and course.

A general distinction is made between:
- Hodgkin's lymphoma or Hodgkin's disease, the best-known form of the disease but also the rarest; it accounts for less than 1 in 7 cases and mostly affects children over 10 years of age, adolescents, and young adults. This cancer can also be seen in seniors, usually after age 70.

- The non-Hodgkin's lymphoma, which is the most numerous and has been increasing by nearly 5% per year over the past few decades.

For more than 20 years, the number of new cases of lymphoma has nearly doubled, especially in developed countries. Lymphoma is currently the 5th most common cancer in France and the 1st cancer in adolescents and young adults.

Yet, this form of cancer is still largely unknown. This is why the patient association France Lymphome Espoir is organizing a worldwide day on September 15 to raise awareness of the disease and its various symptoms.

The 'World Lymphoma Day' (WLD) invites people to talk about this cancer in order to better recognize and defeat it. Indeed, different treatments are possible, depending on the type of lymphoma, its aggressiveness, its stage of evolution, the number of treatments received and the patient's age: chemotherapy, immunotherapy, radiotherapy and stem cell or bone marrow transplant.

← Previous Love: beware of the myth of the perfect couple!

Next → Medicine: what is an expert patient?