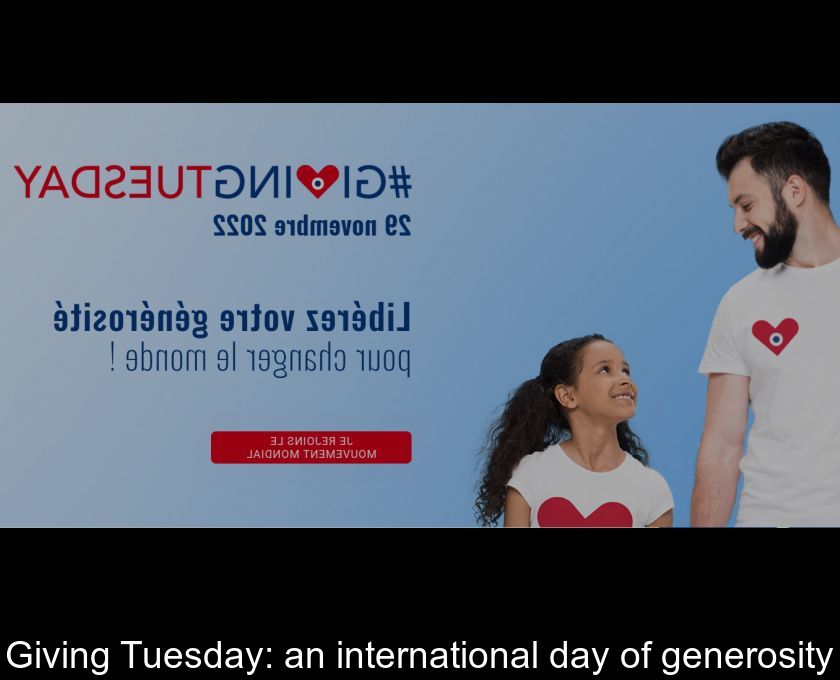 Tuesday, November 29, 2022 will be the third edition of Giving Tuesday, also called 'Mardi je donne' in French-speaking countries. As the holiday season begins, this international day calls on the public to be generous and to get involved with charities.

A movement born in the United States

In the United States, the last week of November is Thanksgiving but also Sales with Black friday then Cyber Monday.

It is in this context where people think above all about making good deals that the United Nations Foundation and the 92nd Street Y association had the idea of creating a day dedicated to giving: Giving Tuesday.

This movement born in 2012 then spread internationally, in the United Kingdom, Iralnd, Israel, Australia and New Zealand but also in Latin America, Brazil and even Singapore! In French-speaking countries like Canada, this day of generosity has taken the name of Mardi je donne.

A day to give

'Giving Tuesday' is not a fundraising association, but an international movement to encourage as many people as possible to show solidarity and donate.

The idea is simple: everywhere in the world, dedicate the Tuesday following Thanksgiving to generosity in all its forms (donations to associations, volunteering, mutual aid...).

This year, Giving Tuesday falls on Tuesday, November 29, 2022. France has not yet joined the official list of participating countries, but nothing prevents us from being inspired by what is done in other countries (http://www.givingtuesday.org/) and among our French-speaking cousins (see the link below to the Canadian site).

To contribute to the Tuesday I give, it's very simple:
1- find a cause that touches you
2- think about what you could do (make a donation, get involved with an association, help your neighbors, spread the word about #GivingTuesday on social networks)
3- don't wait any longer, do it!

On Giving Tuesday, everyone is invited to get involved by giving what they can: money, time, clothes... No matter what form your donation takes, the important thing is to think of others. It's up to you!

← Previous Executive status: what are the advantages and disadvantages?

Next → Glasses without borders: the association that collects your old glasses