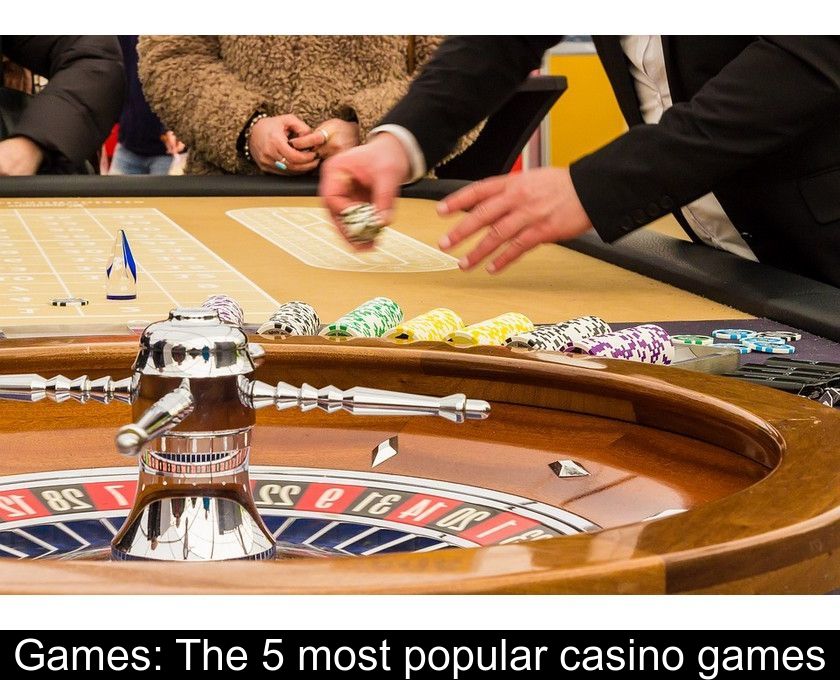 Games: The 5 Most Popular Casino Games

Whether you are a seasoned gambler or a complete novice, it is hard to resist the atmosphere of casinos. For those who dare to venture out, there are plenty of games of chance and money to choose from. For those who are new to casinos, whether real or virtual, here are the top 5 most popular casino games.

The roulette is a game of chance where players must bet on a number.

But what is certain is that it is one of the most popular casino games because of its simplicity. It is indeed very easy to learn how to play roulette.

It should also be noted that European roulette is different from American roulette.

The croupier is responsible for directing the game by manipulating the ball (the white ball, formerly made of ivory and now made of resin) and the cylinder.

It is also the croupier who announces the winning number and the different phases of the game by declaring the following phrases: Make your bets, Bets are made, Nothing goes anymore!

The slots are probably the most popular casino games of all, at least among beginners.

This is because there are no techniques or rules of the game to master in order to have fun on the different types of slot machines.

So for a first contact with the casino world, the easiest way is to opt for one of these machines. Just launch the game and watch the thumbnails scroll before your eyes until you stop, hoping that 3 identical images are aligned.

The principle of the game is so simple and fun that you can quickly become addicted to slot machines!

To note: to avoid leaving your shirt there, the best solution is still to set a budget not to exceed during the evening and stick to it no matter what.

The poker is a card game where, unlike other casino games, not everything depends on chance.

In fact, experienced poker players can control the game through their ability to bluff, assess risk and of course interpret their opponents' reactions.

Originally reserved for casinos, the game has been so successful that it has eventually spread far beyond the gaming floor. Today it is the subject of international competitions that many enthusiasts follow with fascination around the world.

If you haven't mastered the complex rules of poker, you should know that most casinos have adapted this game onto Slot machines with much simpler rules.

blackjack is a card game with a simple goal: to win, you must score 21 points or more than the bank (held by the dealer), but never exceed the score of 21.

If a player scores higher than 21, he is said to burn out and loses his initial bet.

The value of the cards is as follows:
- the face value of the card for cards from 2 to 9
- it is 10 points for 10s, jacks, queens and kings. These different cards are called logs.
- It is 1 or 11 points, at the player's option, for the Ace.

However, when the player reaches 21 points with more than 2 cards, it is counted as 21 points and not blackjack.

In theory, it's all about luck, although some gifted players do count cards, as in the movies Rain Man and Las Vegas 21.

In fact, it was because some players were able to count cards that casinos multiplied the number of games, when originally they played with a single deck of 52 cards.

This card game is believed to have originated in the United States in the late 17th century or during the 18th century under the name 21. Today, it is popular in both physical casinos and virtual casinos, such as paid online casinos in Quebec.

craps, which is played with dice, is very popular in North America and somewhat less known in Europe.

It is a money game played with only two dice. But, while there is only one dealer in blackjack, there are four at the craps tables!

These four dealers are:
- the table manager, who ensures that the rules of the game are followed
- a first dealer to place the bets
- a second dealer to pay the winning bets and collect the losing bets
- the stickman who directs the game by picking up the dice with the stick and giving them to the players.

In a second step, the player rolls the dice again and must get the same number of points as previously established.

This dice game is sometimes seen in movies like Ocean Thirteen and in American TV shows like Friends! It also appears in one of the films of the James Bond saga: The Diamonds are Forever.

Next → How to spend your money to maximize your happiness?