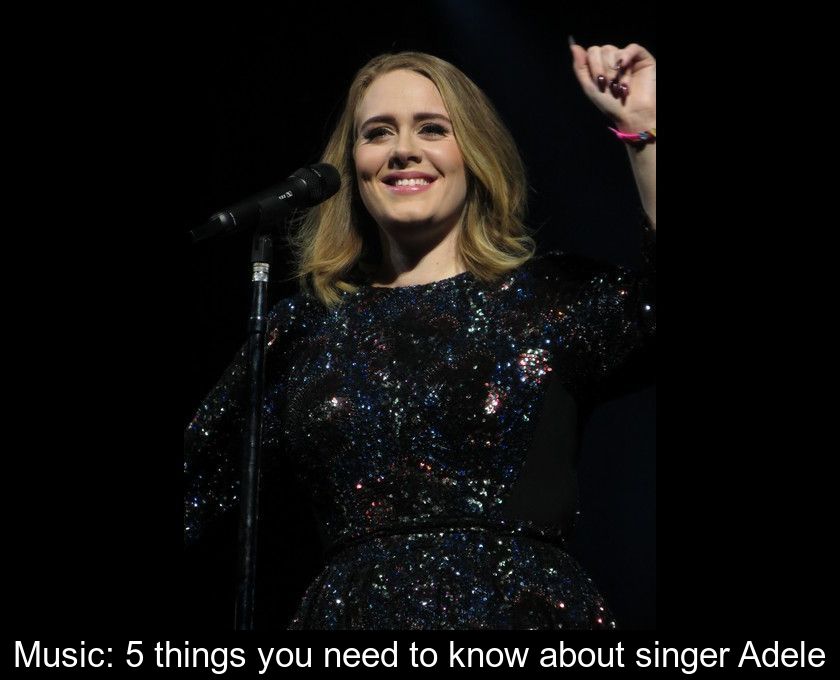 Music: 5 Things You Need To Know About Singer Adele

With the release of her new album 30, Adele is back in the international spotlight. But are you sure you know everything about the famous British singer? Here are 5 things you need to know about this must-see artist.

1- She names her albums after her age at the time of writing.

Adele was born on 5 May 1988 in England, in the London borough of Tottenham.

She wrote her first single Hometown Glory (which appears on her album 19) in just 10 minutes when she was 18.

The singer born under the astrological sign of Taurus is now 33. But her new album isn't called 33...

If the titles of her albums (19, 21, 25 and 30) intrigue you, you should know that these are the ages at which she wrote the songs featured on each album.


2- She is back in the spotlight after 6 years of absence.

The release of the album 30 is a worldwide event. Indeed, Adele is making her return to the media and to the stores after 6 years of absence devoted to the reflection and Writing of this new opus.

The singer returns transformed, and not just physically! She readily admits that her divorce inspired several songs on this album.

She even admits that Writing the 30 album was a form of therapy after her separation from her husband Simon.

In her new songs, she also talks about her role as a mother to her son Angelo and her relationship with fame.


3- His song Easy on me is the most listened to song of all time in 24 hours.

With her exceptional voice and songwriting talent, Adele has been breaking all records since the beginning of her career.

She is arguably even one of the most popular female artists of all time.

Even before the release of 30, her albums were the best-selling of the century, with over 120 million albums sold worldwide.

Her most popular album to date is 21, which ranks in sales just behind the Beatles' Sgt. Pepper's Lonely Hearts Club Band

And his new album 30 looks set to reach new heights. Indeed, the first single taken from that album entitled Easy on me was released a month ago. The song was then the most listened to song of all time in 24 hours.

The singer, who shares the title of most Grammy-winning female artist in one night with Beyoncé (she won 6 at the 2012 ceremony), is well on her way to sweeping up multiple awards again this year!


4- She collaborates with Xavier Dolan for his videos.

Quebec filmmaker Xavier Dolan directed the video for the single Easy on me.

Adele, who had already collaborated with him for the Hello video a few years ago, doesn't hide the pleasure she has in working with this director:
"We're on the same page," she said.


5- She wants the songs on her albums to be played in order.

At the singer's request, the listening platform Spotify has changed its default playback mode.

Adele had complained that the album playback feature was set to shuffle by default.

For her own albums, she says she prefers songs not to be listened to out of order but in the order she sets.

Indeed, the singer pointed out that artists put a lot of care into choosing the order of songs on an album.

Music streaming app Spotify has been sensitive to this argument: now, if you start playing an album on Spotify, the tracks will play in order. But you can still choose random mode if you prefer...

← Previous Machu Picchu and the Treasures of Peru: an immersive exhibition in Paris