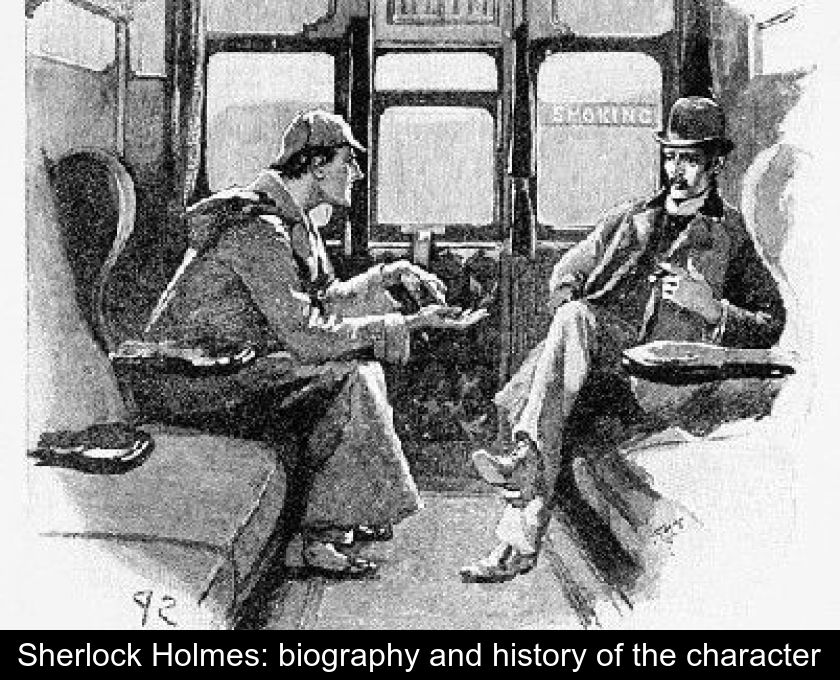 Sherlock Holmes: Biography And History Of The Character

Sherlock Holmes, the character invented by Sir Arthur Conan Doyle, is arguably the most famous detective in world literature. Here is the history and the imaginary biography of this character.

Sherlock Holmes is a character who was imagined by the Scottish novelist Sir Arthur Conan Doyle (1859-1930).

Although he was also the author of science fiction books, historical novels, plays, and poetry, Conan Doyle owes his fame to this character, whom he first brought to life in 1887 in the detective novel A Study in Red.

A private detective with a remarkable memory and sense of observation, Sherlock Holmes, frequently accompanied by his friend Doctor Watson, is the main character in 4 novels and 56 short stories.

According to the most common assumptions, Sherlock Holmes was born in 1854 (but no date or place of birth is specified in the work of Sir Arthur Conan Doyle).

A grand-nephew of the painter Horace Vernet, Sherlock Holmes is a hardened bachelor, rather misogynistic. His only known relative is his older brother Mycroft, who holds important positions with the British government.

Holmes lives at 221b Baker Street, London, where he works as a private detective. His landlady is Mrs. Hudson. He began his detective work in 1878 and met Dr. Watson, his friend and biographer, in 1881.
He received the Legion of Honor in 1894, but refused the title of knight.

Tall, slim, elegant, Holmes is described as an inveterate smoker who sometimes takes drugs. Superiorly intelligent, he was also a knowledgeable music lover (he played the violin) and an accomplished boxer and fencer...

In 1893, the novelist who became famous thanks to the adventures of Sherlock Holmes wanted to make this character disappear. So he imagined his disappearance, told in The Final Problem (1893). Faced with pressure from the public and publishers, he began Writing the adventures of the famous detective again with The Hound of the Baskervilles (1902) and then the collection The Return of Sherlock Holmes (1903).

Today there is a museum in London dedicated to the famous detective: the Sherlock Holmes museum, logically located at 221b Baker Street (see link below).

The adventures of this character have been the subject of numerous adaptations for television and film. Holmes has inspired hundreds of films, the latest of which will be released in France on February 3.
In the film 'Sherlock Holmes' by Guy Ritchie the legendary detective is played by Robert Downey Jr while the character of Doctor Watson is played by Jude Law.

Why is Sherlock Holmes a hero?

Most of the characteristics of Sherlock Holmes fit the description of a hero given by the causal and lexical definitions.

Because of his acts of bravery throughout the series, Holmes meets the criteria of a heroic character. He makes an impact on his environment by taking constructive action and repairing all the damage that his nemesis Moriarty has inflicted. As a result, Holmes spends many hours each day solving cases that make the world safer. As a result, Holmes' fame has gradually grown in the wrong direction; because of his fixation on finding the truth, society now considers him a psychopath. In addition, Holmes is often kind and altruistic; he always prioritizes the lives involved in each case, placing them above his own life.

Sherlock Holmes is tenacious and relentless, pursuing each case. As each case is solved and a villain is eliminated (whether violent or not), this illustrates the idea of heroism, as it stops the Spread of a crime that has already wreaked unimaginable havoc. In the series, Holmes never gave up on an unsolved case; rather, it was always his unwavering drive that helped solve the case.

Throughout his cases, Sherlock Holmes shows great courage. Not only does he have no qualms about taking on his nemesis Moriarty, but he also strives to improve the lives of everyone he meets. His selfless work has changed society dramatically.

Next → Simon Beck : the inventor of snow art