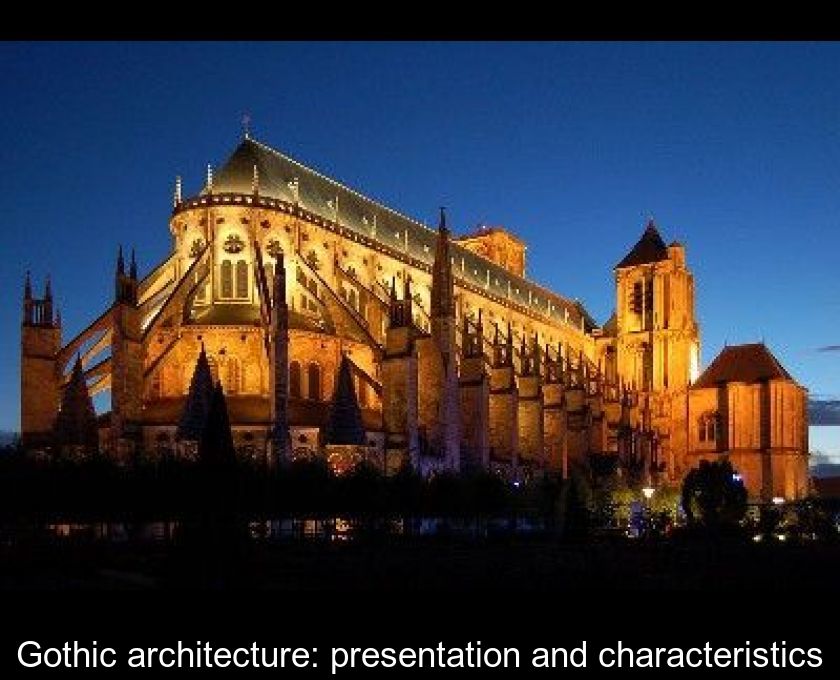 Gothic art, which appeared in Ile-de-France in the 12th century, mainly concerns the architecture of religious buildings. It is represented throughout France by cathedrals whose finesse and elegance make us forget their impressive dimensions. We propose to discover the characteristics of the gothic architecture and some of the most remarkable buildings in this style.

The Gothic architecture developed in Western Europe between the 12th and 16th centuries.

This architectural style, which succeeded Romanesque art, Spread rapidly north of the Loire River.
It then Spread throughout Europe before being supplanted by Renaissance architecture in the mid-16th century.

Religious monuments (churches, cathedrals, abbeys, cloisters) as well as secular ones were built in this style. But it is the cathedrals that embody it most visibly.

Characteristics of the Gothic style

Before the emergence of the Gothic style, Romanesque architecture was characterized by 'round' (i.e. semi-circular) arches and massive vaults.
The construction of religious buildings required Thick supporting walls, most often reinforced by buttresses attached to them.

Gothic art solved the strength problems of Romanesque art by using new architectural techniques: the bayed arch and broken arch.
A ribbed vault is a vault formed by two arches that cross each other diagonally. Thus, the weight of the stones rests not on two but on four pillars.

These innovations made it possible to build much taller and thinner buildings.
In fact, the pointed arch and the pointed crossing allow the weight of the building to be directed towards the ground.
The Walls thick can therefore be replaced by huge pillars and be open to the outside.
Gothic architecture has left us buildings with pointed and chiseled spires, openings, rose windows and numerous stained glass windows.

Furthermore, to support the weight of the cross vaults, this style uses the technique of buttressed arches.
These half-arch props are located outside the building: they rest on a buttress and support the wall where the strongest thrusts of the vaults are exerted.

Thanks to the various technical innovations of Gothic architecture, light became so abundant in cathedrals that their builders were able to color it with stained glass.
These stained glass windows depicting biblical scenes, the lives of the saints, or sometimes daily life in the Middle Ages served to edify the faithful, in the manner of a catechism in images.
They also participated in the symbolism of divine light and were intended to bring the divine presence into the cathedral.

The different ages of the Gothic

In Gothic architecture, the following periods are generally distinguished:
- the 'primitive' Gothic, which succeeded the Romanesque art around 1130, with the appearance of the ribbed vault
- the 'classical' Gothic, between 1190 and 1230, with buttresses based on the model of Chartres cathedral
- the 'radiant' gothic, between 1230 and 1350, characterized by majestic roses and numerous stained glass windows
- the 'flamboyant' gothic, in the 15th century, offering busy and tormented decorations
- the 'late' gothic in the 16th century, characterized by an overload of decorations.

The most famous gothic buildings

In Europe, we can also mention St. Peter's Cathedral in Cologne in Germany, the cathedrals of Burgos and Leon in Spain, Westminster Abbey in England and Antwerp Cathedral in Belgium.
In Italy, Milan Cathedral has no less than 135 jagged spires.

You will find a photo gallery on the site below.

← Previous Gold and Silver Wonders: an exceptional exhibition in the Abbey of Mont-Saint-Michel

Next → Gustave Eiffel: 5 things to know about the famous engineer