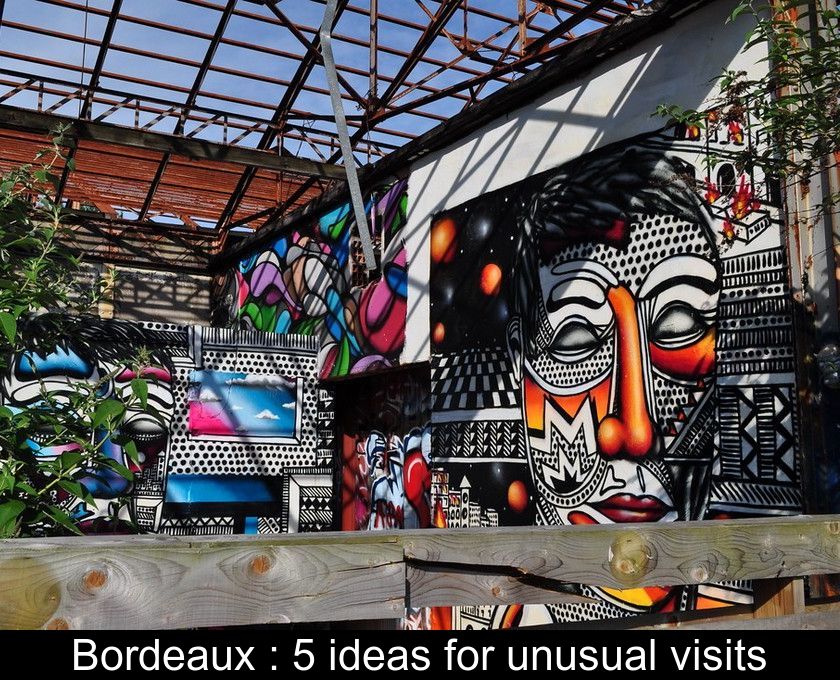 There is more to Bordeaux than just the water mirror or the Cité du Vin. The city that is nicknamed the Sleeping Beauty will awaken your curiosity with places and activities that are out of the ordinary. If you want to discover the city off the beaten track, we have listed for you 5 ideas for unusual visits.

1- A submarine base that has become a place of culture

To inaugurate this list of 5 ideas for unusual visits in Bordeaux, we advise you to visit a former submarine base built by the Germans in 1941 to hide their submarines in the Gironde estuary.

Now transformed into a cultural place, this site steeped in history hosts contemporary art exhibitions. It is also home to les Bassins de Lumières, a digital art center that follows the concept of the Atelier des Lumières in Paris and the Carrières de Lumières in Baux-de-Provence.

This unusual, immersive and magical experience alone is worth the trip from the capital, especially since the journey from Paris to Bordeaux now takes less than 4 hours. For more information, click on the link.


2- A Design Museum in a prison

Another amazing cultural venue, the Museum of Decorative Arts and Design is located in a 17th century Bordeaux house.

This private mansion would have nothing extraordinary if it had not been bought in 1880 by the City of Bordeaux, which decided to build a prison on the site of the garden.

Today, these two buildings are classified as Historic Monuments and part of the museum's collections are exhibited in the former cells.

This secret place deserves to be among the 5 ideas for unusual visits in Bordeaux because you can still see locks and thick walls. So many unexpected details reminding us that this building was once a prison!


3- The Utopia cinema in a former church

To continue your cultural journey off the beaten path, we recommend going to see a movie at Utopia.

This art house cinema programs independent films and big budget blockbusters. All foreign films are shown there in the original version with subtitles.

But that's not the only special feature of this venue. If we included it among our 5 ideas for unusual visits in Bordeaux, it's mainly because this cinema is located in a former 15th century church. This most surprising setting will make your session truly unique!


4- The Darwin space, an eco-district full of life

It's impossible to list 5 ideas for unusual visits in Bordeaux without mentioning the Darwin space, an urban wasteland converted into an eco-district.

Installed on the right bank of the Garonne, in a former military barracks of nearly 20,000 m², this alternative place houses, among others, the Magasin général which is the largest organic restaurant in France!

Darwin is also a colorful neighborhood, known for its street art. Don't hesitate to stroll around with your eyes wide open to discover frescoes, tags and graffiti on the walls. Street art fans will be delighted by this arty urban stroll!


5- The fishermen's huts of Bègles

If you are looking for a different kind of walk, closer to nature and away from the hustle and bustle of the city, we recommend you to go and discover fishermen's huts on the banks of the Garonne.

These huts on stilts, also called carrelets, are the last of our 5 ideas for unusual visits around Bordeaux. They are located in the commune of Bègles, in the southern suburbs of Bordeaux, behind the Rives d'Arcins shopping center.

True witnesses of the past, these picturesque sheds prove the attachment of the Girondins to their river and to their history.

The port of Bègles is the ideal starting point for this walk which lasts about 1h30. In all seasons, this walk allows you to recharge your batteries far from the tourist crowds, while enjoying the magnificent view and the calm.

← Previous Boating: what are the rules to respect at sea?