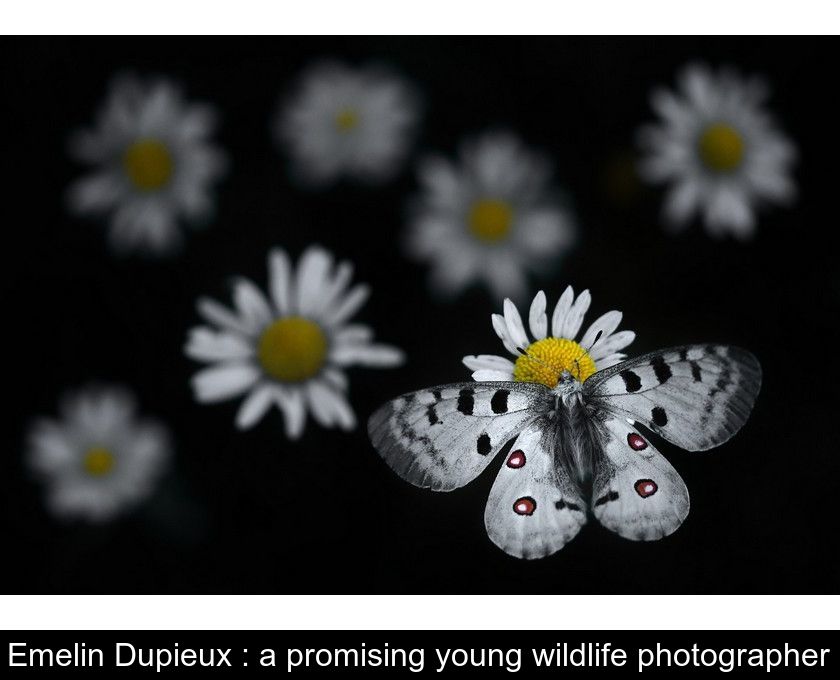 A teenager with a passion for nature

A lover of nature from a young age, Emelin Dupieux, now 15 years old, has been taking up photography for only three years.

He explains: 'Photography, I started only three years ago, precisely to extend this pleasure I had to observe the wildlife that lives around me.'

Today, this young high school student devotes many of his weekends to naturalist photography, sometimes going as far as bivouacking with his father to capture beautiful images.

One of the photos of this 15 year old from Ardèche caught the attention of the jury among the 50,000 shots from all over the world that competed for the Wildlife photographer of the year!

This competition, organized for nearly 60 years by the Natural History Museum in London, is one of the best known in the field of naturalist photography.

This year, 50,000 shots taken by photographers of 100 different nationalities, both amateur and professional, were judged by an international jury.

Emelin's photo was ranked among the 3 finalists among 1200 photographs received in the 11-14 years category. In 5 years, no French person had reached the final in this category.


A snapshot of a rare butterfly

For this contest, Emelin Dupieux submitted one of his shots taken in the summer of 2020: a photo of an Apollo butterfly sitting on a daisy.

This image, the young photographer captured at dusk in a meadow in the Jura mountains.

Emelin, then 14 years old, had to be patient and quick to capture this scene, as the butterfly with its outstretched wings closed them a few minutes later, definitely going into night mode...

About that day, the young photographer says:
'I was on holiday with my parents and we had spent the day wandering around the mountains, looking for things we could photograph. Until we discovered this meadow that a dozen Apollo seemed to visibly enjoy.'

To take the award-winning shot, Emelin returned to this meadow at dusk and took several shots, gradually adjusting the settings and focus until he got the perfect shot.

It's no coincidence that this photo won the award because it is technically flawless.

Photographing a white butterfly on a flower of the same color allows you to underexpose the photo and keep the butterfly properly exposed while having a very dark background around it.

In Emelin's shot, the stark contrast between the black background and the white butterfly also brings out a few pops of color: the yellow hearts of the daisies and the red spots of the Apollo.

But this photo is not just aesthetic. It also tells a story, about a rare and endangered butterfly.

Indeed, it is increasingly rare to come across an Apollo in France. To survive, this butterfly needs a sufficient snow cover and, in the middle mountains, these conditions are becoming rarer due to global warming.

Through his photos, Emelin wants to send a message. 'It's not just the big mammals that are threatened. It goes all the way down to the smallest animal like this Apollo that is threatened and in danger of disappearing because of global warming. We don't have two planets and I really think we need to protect this one, pay attention to what surrounds us'.

As usual, the jury of the Wildlife photographer of the year award has rewarded photographs that make us aware of the impact of human activities on nature.

Emelin Dupieux is already assured of having his photograph among the 100 shots selected to appear in the 2021 portfolio, he who preciously keeps the portfolios from previous years on his bedside table.

The first quality of a wildlife photographer is to be passionate about nature, and Emelin undoubtedly is. Having a father in charge of the Monts d'Ardèche regional nature park undoubtedly contributed to his early passion for wildlife.


Once she had passed her baccalaureate, Emelin was thinking of studying for a BTS in Nature Management and Protection and dreamed of being able to make a living from wildlife photography and travel.

Two regions of the world particularly fascinate him: Antarctica and the Arctic. He would like one day to follow in the footsteps of the French photographer Vincent Munier who was the first to photograph the Arctic wolf.

Next → Erik Johansson : a photographer master of illusion