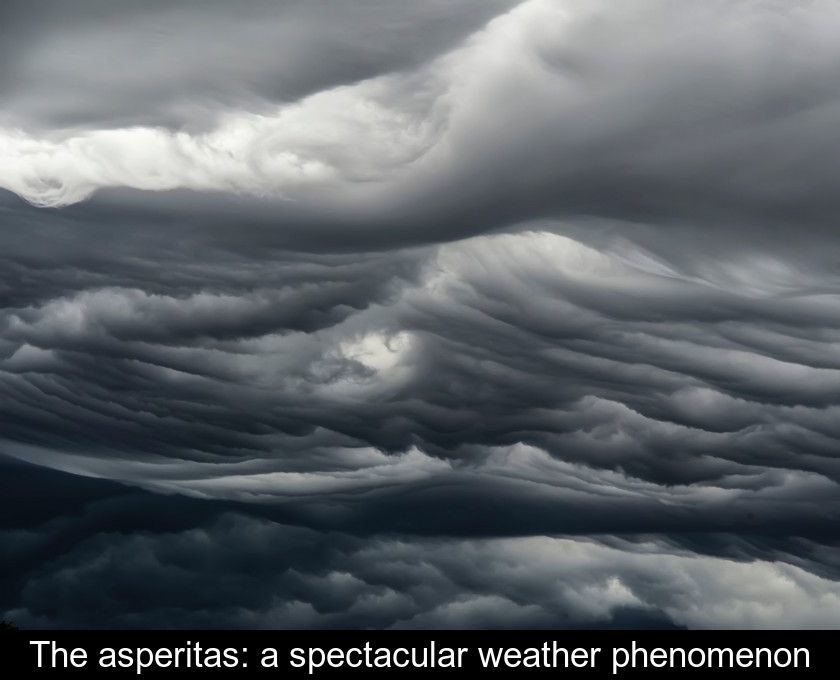 The Asperitas: A Spectacular Weather Phenomenon

Have you ever observed spectacular waves of clouds forming in the sky? The weather phenomenon that seems to turn the sky into a stormy sea is called asperitas or asperatus. Here is everything you need to know about these strange and very photogenic clouds.

The asperitas, also referred to as asperatus, is a common and sometimes spectacular weather phenomenon.

When certain conditions are met, these waves of clouds do not go unnoticed in the sky. And yet, asperitas has only been recognized by the World Meteorological Organization (WMO) for a few years.

This cloud formation was first photographed in the 1970s in the United States. But it wasn't until 2017 that it was officially classified in the International Cloud Atlas.

It should be noted, however, that an asperatus is not a cloud in its own right, but rather a characteristic shape that some clouds take.

Asperitas are cloud formations very common throughout the world whenever the weather is unstable. They form most often with stratocumulus or altocumulus clouds and can be recognized by the ripples that appear at the base of these clouds.

The tumultuous waves seen in the sky are merely thea deformation of classic clouds of low and middle altitudes, such as stratocumulus and altocumulus clouds located between 1500 and 4000 m above ground.

It is the superposition of two different currents that creates these ripples, deforming the cloud layer. The result of these turbulences is made even more visible by the light at certain times of the day such as sunset.

The visual effect depends on random factors such as lighting and the thickness of the cloud layer.

A rough sea in the sky

Usually, these cloud ripples go unnoticed over our heads. But sometimes this wave-like cloud formation takes on a tumultuous or even scary appearance.

This weather phenomenon can become impressive during thunderstorm season in the United States but also in Australia, New Zealand and some European countries.


In France, it's more rare for these cloudy waves to reach spectacular proportions.

Despite their sometimes impressive appearance and their name deriving from a Latin word meaning "brutal," asperitas are harmless weather phenomena. If you find yourself underneath them, you only risk a small shower or even... nothing at all!

These sometimes psychedelic waves of clouds often form in advance of a thunderstorm or disturbance when the atmosphere is unstable. However, asperatus can also appear in a very calm environment with no nearby thunderstorms.

It is rarer for this phenomenon to occur in cloudy skies on stable, dry days, but it is not impossible.

Therefore, don't panic if you see these impressive waves forming in the sky. You don't need to run for cover. You can enjoy the show and take some nice pictures!

Next → The best version of myself: what is Blanche Gardin's series worth?